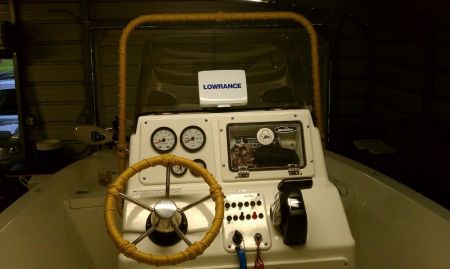 mrgo rocks in response to a report titled:  artificials by mrgo rocks or other structure

Hello. I have the Lowrance Elite-5 (not the DSI). It has the standard base maps, and I'm wondering if any of the map upgrades (Navionics or Nautic Insight) provide better detail for this unit. If so, which is better? Thanks in advance.

Hey guys. I'm running an 1810 Nautic Star bay boat with a 115 Yamaha 4 stroke. I cruise at about 35 mph and WOT is approx. 41 mph. I've seen posts on the Nautic Star facebook of others running the same boat (one guy had a Suziki 4 stroke vs. Yamaha) and they claim they achieve WOT of over 50 mph. Although I'm not very concerned about the speed, I'm wondering if I would be able to get better mileage with a different prop. Yamaha performance bulletins only available for this boat with a 90 four stroke. I believe my prop is 13 X 19. Any input is appreciated. 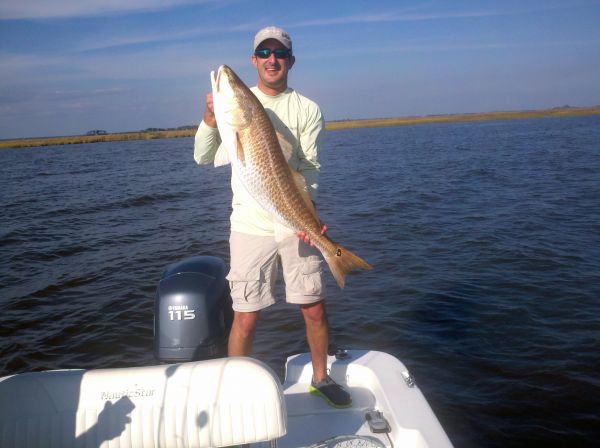 Fished out of the Rigolets Friday afternoon. Headed to Lake Borgne and ended up near Pole Cat Bend due to the wind. Caught this red after noticing a few of these busting up bait fish. Released him after the fight. Ended the day with 10 keeper trout and a nice flounder. Many throw back trout and reds (small reds). Most caught on live shrimp and a few on Gulp shrimp (glow or pearl color). 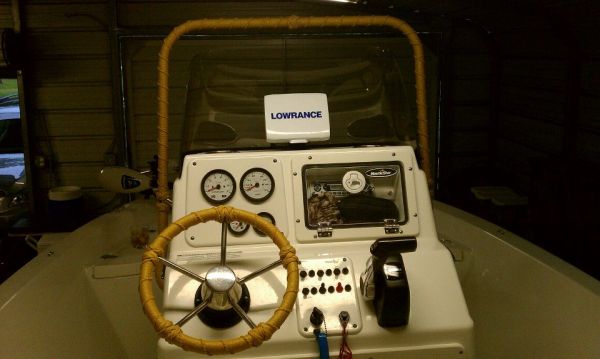 My dad served in the Coast Guard and learned to tie some cool nautical knots. He wrapped my handrail and steering wheel for me.

Just looking for opinions on reels I see in Cabelas, Bass Pro magazines, etc., such as the Shimano Stella and Daiwa Steez. The prices on these things range between $600-$1000. Is anyone actually buying these? I always try to buy what I consider quality equiment, but I have a hard time believing that an inshore spinning reel that costs $700 is that much better than one that costs $150 or even $100. I know they have more stainless components and more bearings, but it seems like a few years of saltwater abuse will eventually takes its toll, and the super expensive reel will perform like any other 4 or 5 year old reel. Of course, I don't own one and doubt I ever will, so this is all speculation on my part. Just always made me think......

Drifted across Lake Borgne near the Rigolets today. Clean water. The water was being busted up by a fish I did not recognize. I have fished since I was 5 (35 now), but I couldn't recognize this fish. We threw into the fray, but only caught ladyfish and gafftop. The fish in question leaped from the water in arcs about a foot off the water and they looked like little tuna. Not sure what they were, but my 20 lb. leader line got broken three times. Might have been sharks, but I really want to know what this leaping fish was. Looked broad in the middle when it jumped with a forked tail; and there were hundreds of them. Any help is appreciated. 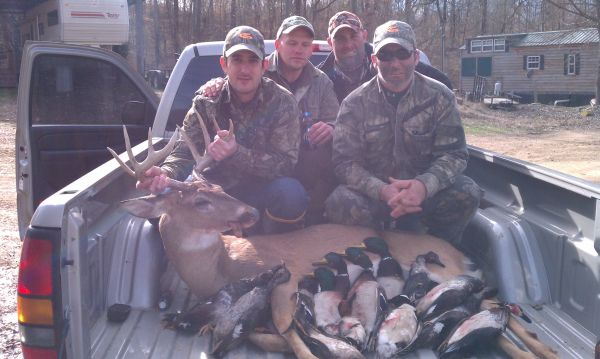 Bucks and Ducks! What a great trip for my first buck. I was hunting this guy while my friends were out wacking ducks! 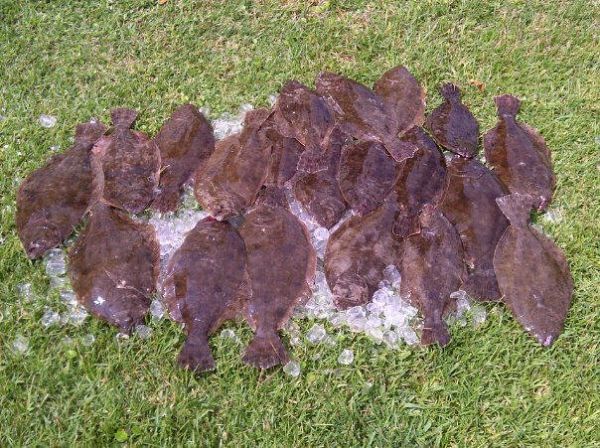 Never caught a flounder limit before. Had to check on my phone while fishing to see what the limit was per person. All caught on plastics and the wierd thing is, all we caught were flounder.

September 26, 2011 at 11:39am
A comment titled: mrgo rocks in response to a report titled: artificials by mrgo rocks or other structure

I've had success (although earlier in the year) using glow or pearl white colored Gulp shrimp with a 1/16th ounce jig head under a cork about 3.5 feet. Actually had bigger trout hitting the Gulp vs. live shrimp. The redfish spinner should work as long as you keep that sucker moving and off the rocks. Good luck.

I agree with the last post. I would be concerned in Lake P. in a 12ft. jon boat. When the lake suddenly kicks up (which does happen regularly), you could find yourself in a bind. 16-17t. should suite your needs. Also, I would opt for the truck, especially if you're looking to upgrade the boat in a couple of years. The Escape is front wheel drive (unless you get the AWD version), so may be tough getting out of some back down launches. I had a 17ft. G3 flatboat with a 60hp and I pulled it easily with a Toyota Tacoma 2WD V6. With the trucks, you get the rear wheel drive and most have a limited slip or locking differential for those slippery back downs. Hope this helps.

I have two friends with 20 ft. Reno skiffs they had built in 2009. They draft about a foot or so, so they can get into some skinny water. I've been in the boat with them in some pretty rough Lake Borgne waters, and if you take your time, the boat can take it, but it's not a pleasant ride. Very wet. Also, with the way the bow comes to a vertical point, you have to be careful you don't plow into the crest of a wave with the bow as it will want to throw the boat left or right. Just my experience with them. The nice thing is you can get pretty much any layout you want.

I usually experience the same thing a couple of times a year. Just goes to show that now matter how much $$ some folks have, it's not enough to buy class.

July 15, 2013 at 9:29am
A comment titled: MRGO in response to a report titled: Looking for easiest/best route to MRGO from Sweetwater Marina

If you are planning to fish the MRGO area, you would be much closer and have to cross much less open water if you launched in Hopedale vs. Delacroix. From Breton Sound Marina, you can take the spoil canal (runs parallel to the MRGO) until it ends and enter the MRGO there. If you are not familiar with the area, I wouldn't rely solely on the gps as there are many shallow flats and blind turns in the spoil canal. I know a few have posted a map with a safe route on this site, so you may try searching for those. Good luck!

The gent in question said he did not have a jack plate. I agree that the prop prob. won't get me an extra 15 mph. It may be a bit of a fish story on his part. I'm comfortable with my cruising speed and rarely run WOT, so I'll probably just put this to bed and enjoy the rig the way it is. I'm able to run from the East Pear River Launch on Hwy 90 well into the Biloxi Marsh (I pick my days) on half a tank of gas (35 gallon tank), so I have been prett happy with that performance. It just peaked my curiosity when I saw his claimed top end speed. I've had the boat since March 2010 and have been very pleased with the ride (most of my buds with other brand boats are impressed at how dry mine is)and quality. No, it's not a Yellowfin, Triton, Skeeter, etc., but for what I paid, it's been a good rig. Thanks for the input, guys.

Whenever we get nutria on the porch, momma just chases them away with a broom.......

Maybe downsizing will solve your problem. I have an 18ft. bay boat that I, on occasion, will trailer myself. I've never found that I wasn't able to get to a spot because I wasn't in a big enough boat. Of course, I'm not trying to fish offshore. With the smaller engine (115 four stroke), it burns very little fuel, relatively speaking.

I think I know why you don't see deer and cows in the same field often.....how would like to hang around someone who constantly yelled 'Mooooove...Mooooooooove'.

On outboards that allow for disconnection of the fuel line, I have always ran the fuel out of the engine after each use. I haven't had a 2 stroke since ethanol was introduced into gas, but even before ethanol, I didn't want to leave gas sitting in the carbs, so I would run it out to avoid any varnishing. My transon saver has a spring built in, so I usually tension it down about half way between no tension and bottoming out the spring. Hope this helps.

I have always purchased shimano reels. I typically get the Sedona or Sahara, and they last a few years (of course, other than a hose off after a trip and occasional oil, I don't do a lot of maintenance). For $80 bucks or so, I figure I'll just use it until it's not smooth anymore and go buy another one. Also have a Penn that I received as a gift that has been very good. It is a Sargus model ($80) and I think the Battle model is also in your price range. On a whim, I just bought a Daiwa Exceler HA ($80), but this weekend will be my first trip with it. Seems like a well built reel. Hope this helps.

September 20, 2012 at 7:25am
A comment titled: bank fishing in response to a report titled: Bank action for a few kids?

Why not try the new Lake Pont. pier on the nortshore twin spans? They just opened until Midnight and it's a very easy fish for small kids.

I reported a reply to the original post and someone else's name shows up as the poster. not sure what is going on, but I am not Michael Breaux.

Typically not a fan of bow fishing, but it seems like a really great way to eradicate carp. Good Job!

I have a 2010 Nautic Star 1810 bay boat powered by a 115 Yamaha 4-stroke. I bought it new and have been extremely pleased with the boat. I looked at Tidewater (comparably priced), but the Nautic Star had many more features and seemed better built. It has a really dry ride, even in a pretty decent chop. No wood construction, very functional layout, drafts very little water, and is quite easy on gas. I can run from the East Pearl River launch on highway 90 across Lake Borgne and fish the Biloxi marsh and burn a little less than half a tank of gas (35 gallon tank). The only option I would get if I did it over again is hydraulic steering just because it's a nice feature. I would have to agree with previous post that the reason for so many sales is likely the economy. Hope this helps and feel free to ask any questions.

Thanks for the posts. In hindsight, I think they may have been mackerel. They didn't seem as wide as the pic posted of the Bumper and they were definitely bigger than a pound. Looked to be between a foot to a foot and a half long. Very silver colored from the quick looks we would get when they jumped. Never had Spanish Mackerel break me off so easy, though (with 20lb. fluorocarbon leader). It was a heck of a show, though!

may have been, but they were not quite as wide as jack....I'm perplexed.