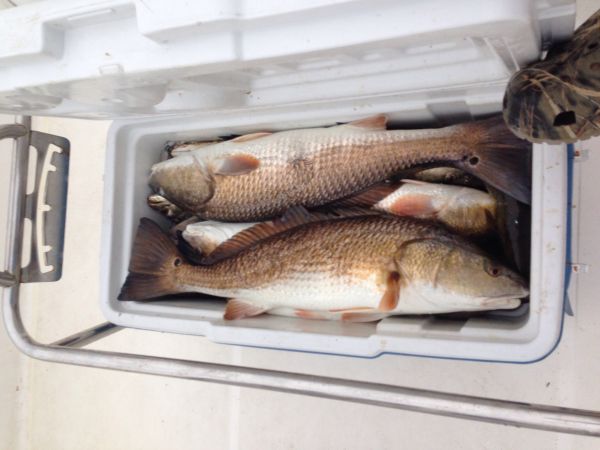 Had a pretty good trip this past Saturday at camp. Fished sat. morning in China bayou/ Lake Raccusee area using plastic and live shrimp and 30 specks nothing to big but a nice box. Was using white/chartruse tail matrix shad and free lining live shrimp. Went on east side Sat. evening to target some red fish and did really well putting togather a nice box of fish using live shrimp. Caught a few specks and one lunker speck that was in the 4-5 lb range all under a cork.

Need info/opinion on Nautic Star 214 xts sb. Anyone have one and do they ride, handle chop and turning. Heard they were a little slower because of tunnel verses regular 214 xts. Thanks 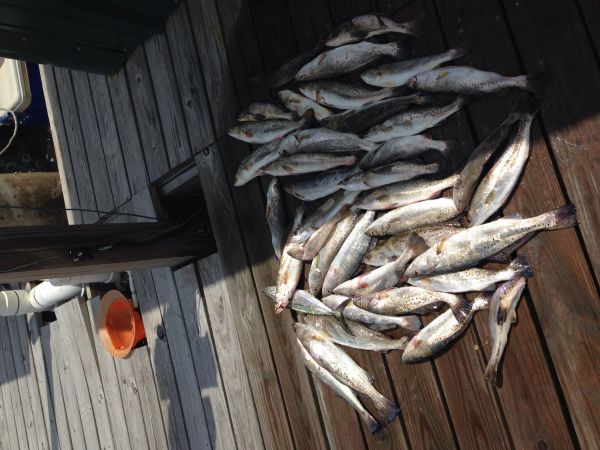 Day 2 fishing from camp. Went to same place saturday morning got there a little later so a boat was in spot i fished friday so i fish another. We HAVE SOME FREAKIN RUDE PEEPS. As i was fishing another-spot and started catching fish again and all of a sudden boats ever where around me. One guy was so close it was pathadic and even stared throwin his line right was. Told him that was close enough. Any ways i was stil catching good quality fish in spite. Had 40 Fish and had enough of these people so went back to camp. I'm telling ya it was like the cows running to get fead 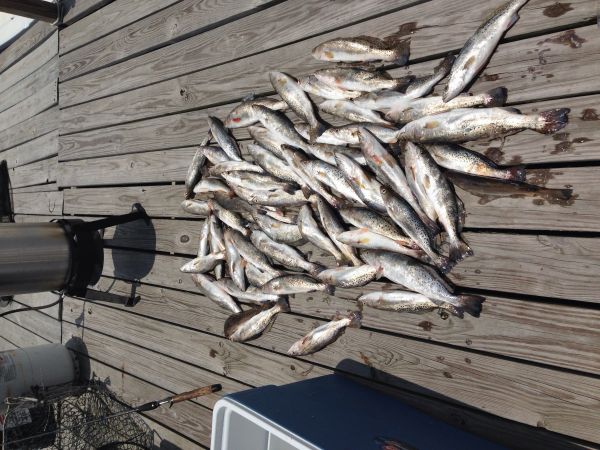 Had a great trip this 4th July weekend. Fished out of camp in. Leeville on friday and headed toward timbalier. Fished the gulf side of island to get out of wind and water was pretty. Started with live shrimp and got tried of going to livewell. Tied on a electric chicken colored matrix and h&h on 1/4 oz jig. Was on the bottom in 7-8 foot of water jigging slow. They had a soft bite so you had to pay attention. Put togather a 2 limit box and was done by 10:30.

Need info plz. Have a power pole monster series 2 on boat and having issue with it losing its program. Getting frustrated so want to know what you think about the talon vs. the Power Pole. Have heard Talon you can crank up if it fails to raise vs. power pole having to pull it up? HELP.

Well had a rough time fishing this past weekend at camp in Leeville. Had a NW wind Friday very low tides caught 2 red fish. Rain all day Sat. so stayed in and watch tv. Sunday was better with the rising tide in the afternoon and wind had laid down search around and found some pretty nice specks in box with a total of 18. All caught on plastic using a white/chartruse tail Voodoo shrimp under cork and a clear speckled/chartruse tail jig on bottom. All in all had a good time and always fun fishing.

Capt. i know that the North West Island out of Leeville or no longer visiable so i was wondering if you have the gps corodinates for them? hanks in advance.

Caught a few this past weekend @ Catfish Lake. No great numbers as the bite was slow. The ones we did catch were nice size for the most part 2-3 pd. range. Caught on carolina rig with cocahoes and on tuxedo jig, nothing under the cork. Had one 13# red and caught a bunch of rat reds. Had to move around and find the pockets were deeper water was close.

Dos anyone have any gps corrodinates for north west island, Philo Brice and fornation etc. Just started fishing again out of Leeville and new gps
Thanks 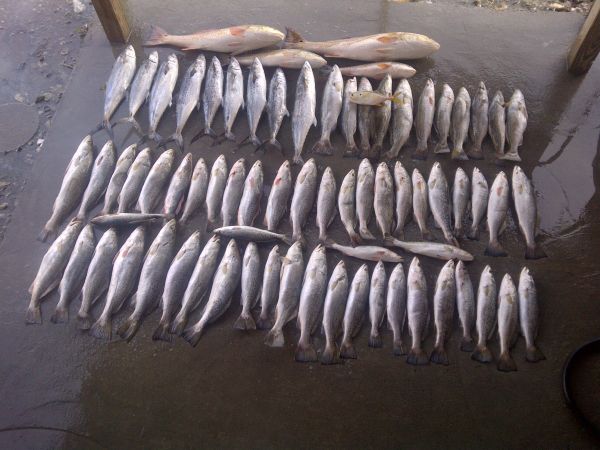 This is a trip my wife, sister, and Richard took on July 4th weekend. We went out of bell pass to Timbalier islands. Was back at landing by 10:00 am and had 74 trout, 9 spanish mackeral and 4 reds. Was a great trip and first time my wife had ever done anything like this.

Hey squid row looks like you had a nice trip. I was there this past weekend at camp also and fished the the west side sat morning at china bayou and caught 30 specks. Fished the east side sat afternoon and did good on redfish which is what I was targeting. Caught mainly on live shrimp. Caught a few specks and one was prob 4lb range and she was full of eggs when I cleaned her. Also noticed you said you were from central, I live just up the road from you in bluff creek/ Clinton area. You have a camp down there and if so where? I am in Melancon trailer park.

Hey Venture man nice box of fish there and glad Capt. got you on them. He is always telling and sharing with us his knowledge and so I wanted to pay it forward to him about that spot. Happy he was able to do so. I did the same thing 4th of July weekend Friday and sat. in that spot.

Had a guide friend fish that area today and he didn't have much luck. He said the closer he got to Fouchon the water got dirty. Not sure what the wind will be but i would go to timbalier and fish the oppsite side of the island the wind is blowing in. Look for birds and schools of mullet on surface. If you have gps look for 5-10 ft of water, sandy bottom. I did not catch one fish under a cork either day. Fished live shrimp on bottom but with light sinker just enough to throw to spot without being on top of fish. You want the shrimp to look as natural as possiable. I used the matrix electric chicken or h&h. Tip h&h is a much tuffer bait. Also pink champain color on a 1/4 long shank jig head. Be patience and work it slow to start. Saturday i had to fish it a little faster bumping and jigging off the bottom. Be careful when you head out there, there is some under water structure. Good luck hope this helped.

Hey Capt. good talking with you Sat. Thanks for the help on south Texaco field. Will call you when i am coming down on the weekend and take you up on offer to come ride and fish with me. Thanks again and best of luck.

UPDATE
Well I called Power Pole today and they told me about a firmware update that does all kinds of stuff. Downloaded to phone and then blue toothed update to unit. So far its working but will see. Also you this app on phone you can operate it from the phone and do diagnosis etc. Pretty cool. Just wanted to share for those of you that have power pole you may need to do the update but you have to have a android based phone to do. I got a friend to load on his phone for me to update.

Thanks guys for input. I will try and call power pole and find out why mine is doing what it is doing by losing it's program and the red light comes on the power unit and won't work until I reprogram.

Thanks guys. Capt i already have a power pole on there but it keeps losing its program and i have to reset it and it's getting frustrating.

January 05, 2014 at 6:11am
A comment titled: fishing in response to a report titled: Leeville Report

Nice catch Squid. Where is this bayou tete d ours?

Sorry for ya'lls lost capt. I know how it feels to lose mans best friend. They are like always dedicated to their masters and always love giving the affection back.

October 06, 2013 at 9:19pm
A comment titled: fishing in response to a report titled: Trout slaughter in leeville!! Finally

So what was the reason you going to that spot.

August 05, 2013 at 9:05pm
A comment titled: fishing in response to a report titled: SEABROOK SPECKS

Where excatly is this?

Navonics south gold is all you will need it is 149.00. Has good mapping and you will have to input your gps corodinates if you have any to go to a certain spot or you can mark waypoint where you are at and the name it. They are good units. Just remember that a lot of coast line and land is no longer there so just because there is water you see dosn't mean that it is deep enough to run. Most of the newer maps and units doesn't show were the land use to be. Good luck.

Hi like your report. I have been fishng in the leeville area for awhile and have been seeing alot of good reports in sheelbeach area. Can you tell me exactly were this is you were fishing? This spoil canal, the rocks, or gps cord? where do you land at? Thanks for any info.

Thanks for report capt. I was down there this past weekend and wind was pretty rough. Fished back side of G.A. with very few. Fished N.W. island afternoon with a little better luck. Sunday stayed in couldn't get out with rough water so fished bayou blue with some luck. Used live shrimp mainly and vudu shrimp. Hope to see you down there soon.

Iwere you i wouldn't waste your money. Water is going to be messed up from all this rain awid. Also i think the wind till going tobe rough, but yeah a bad fishing is better than a good day at work right!

Nice catch. his pass weekend @ Catfish Lake and caug a few.No big numbers butall were 2-3 pd. range all on minnows and tuxedo jig on carolina rig, they just wasn't hitting under cork. Got one 13# red.

Squid he might wanna do a google search for the parts, i bet he could find.

March 31, 2013 at 9:06pm
A comment titled: Fishing in response to a report titled: Top Water in Catfish Lake

Were ya'll fishing on the sulfer mine side or the other side from public landing?

huntley has not filled this section yet.