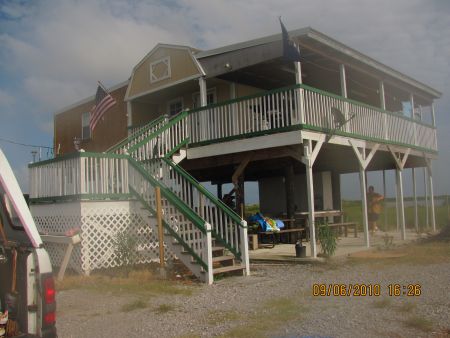 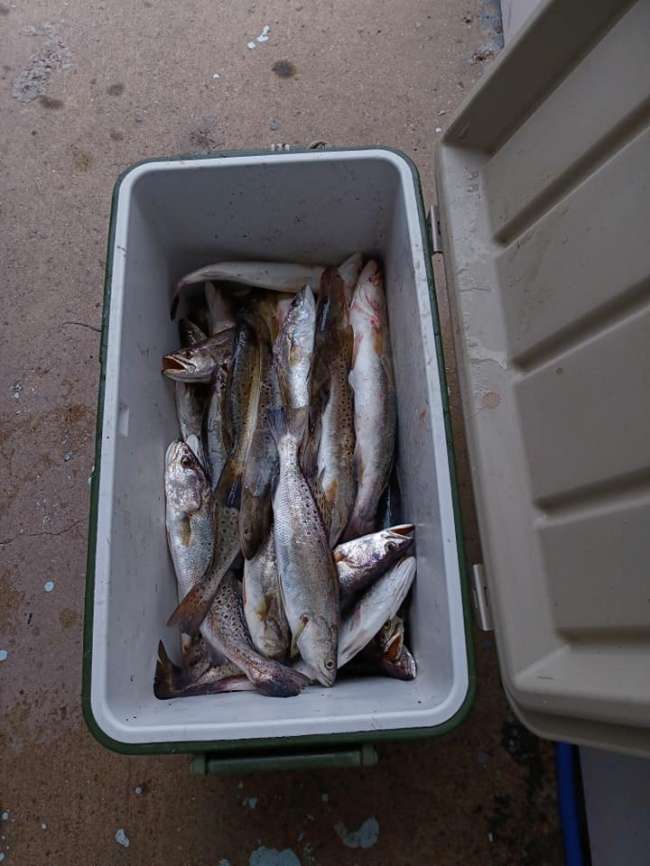 81 fish today in the big Timberlier Bay. First time this year we actually quit fishing because of the heat. Bite was a little slow in early morning but was picking up as the the morning went, left em bitting at 10am. 40 speck 39 white trout and 2 reds. All om pick artificial. [ speckle-searcher ] 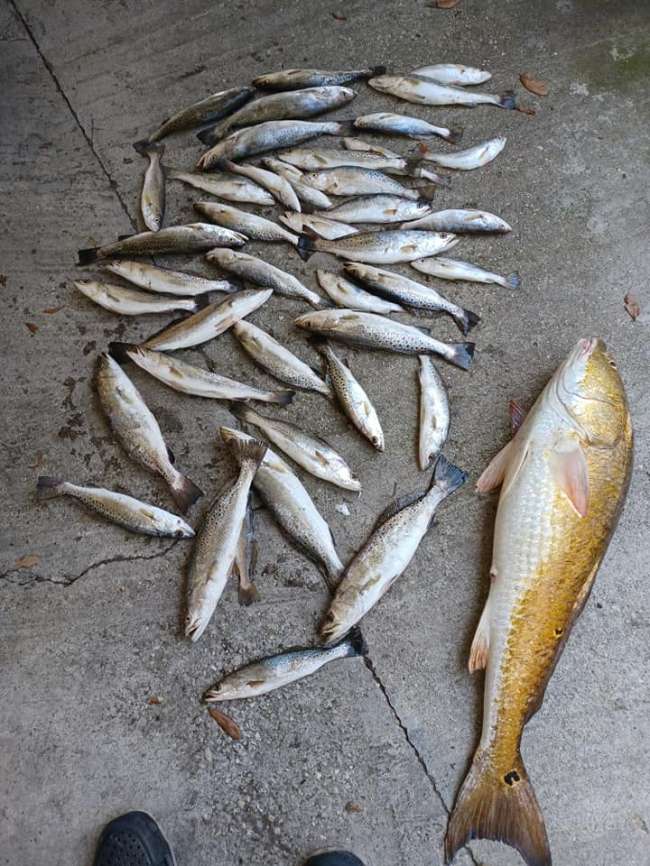 Fished Timberlier Bay Sat. 8-7-21 was a slow bite for us, had to pick away at em and move often, ended up with 42 fish 28 speck 13 white trout and 1 bull red. There were a lot of bull reds and sharks out to day those or my bates with pink being the best. Specklesearcher

August 08 at 9:13am
BAD Weather in Timberlier 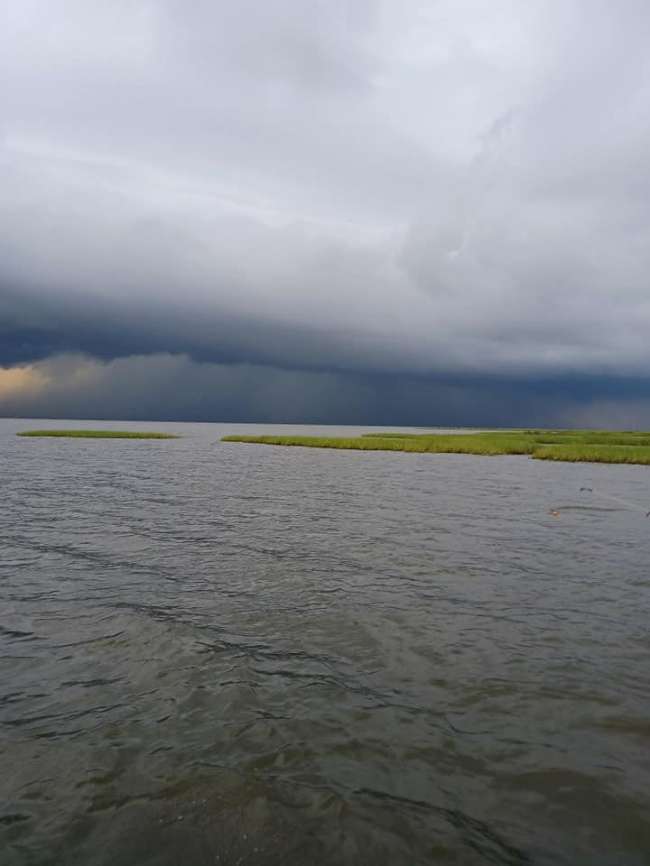 Bad Werther in the big Timberlier to day from day break till 10;30 keep us from gong to fish were we wanted, so we had to run to a near by camp and after the Weather it was still to choppy to go were we wanted so we went out and fish the Fourchon pass and the beach, caught enough to make a good meal by noon. will give it a other try next Sat. still then good luck fishing. Seacklesearcher 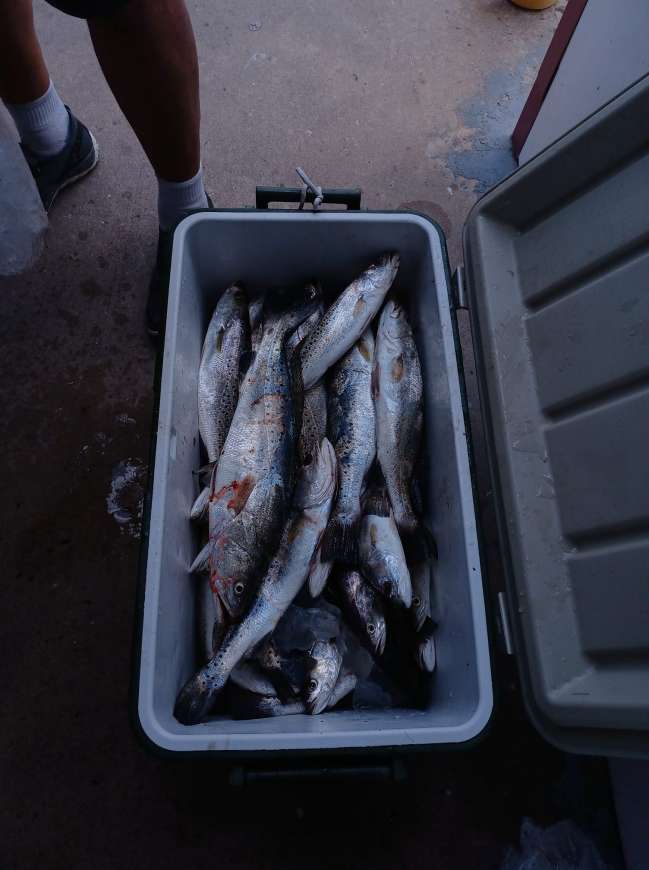 Breezy North wind drove us to the beach, fishing Elmer's Island and the Fourchon rock barges, not much there so we took a choppy ride to East Timberlier Island only to out the last storm totally destroyed it [SAD] all the buildings you see in my post were behind the Island know the water or right against it ,with that said we did fine some speck there had 53 . Specklesearcher 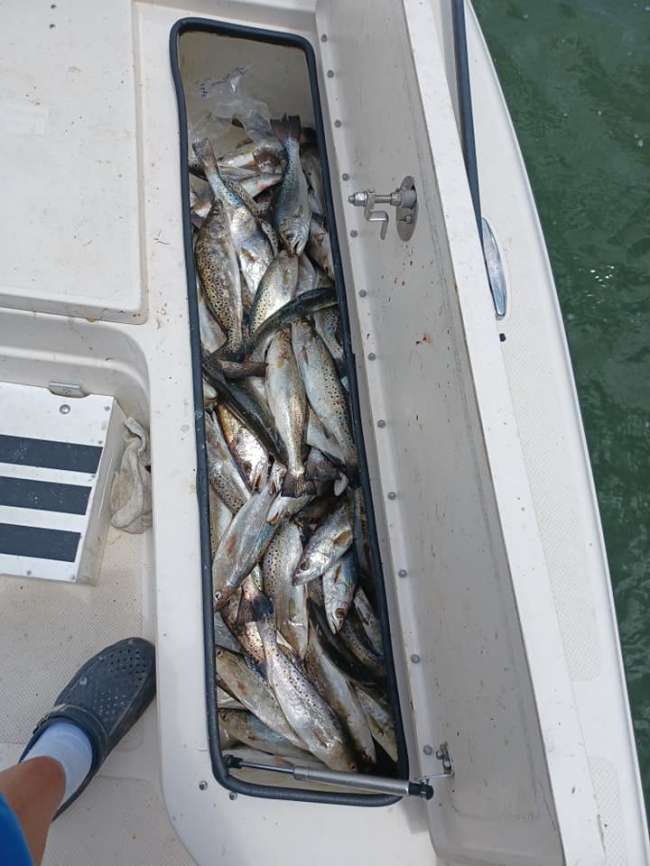 July 18 at 9:27am
Fishing white trout and speck in same place 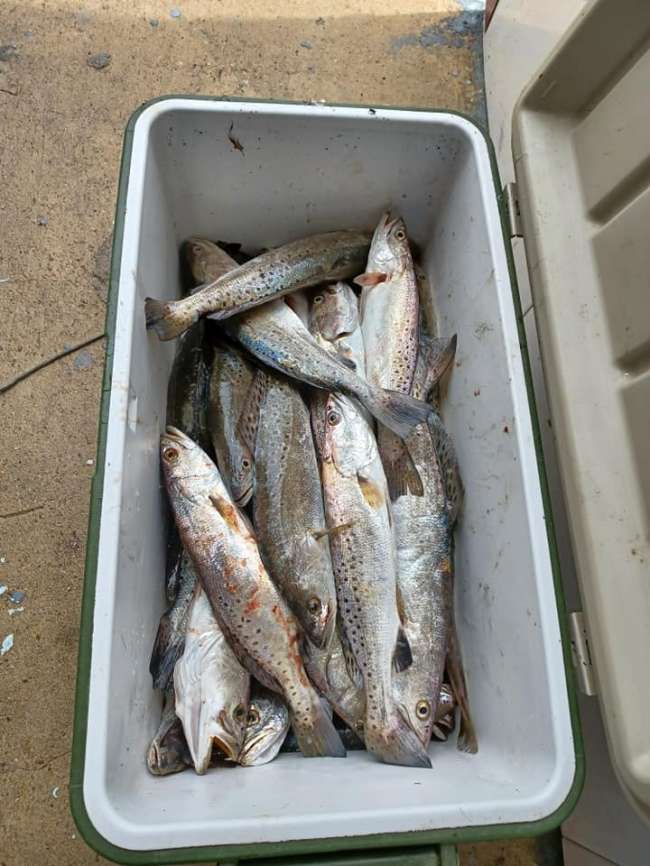 If you like white trout. We went to Calliou Island this Sat. morning and the white trout were insane, Stop at 37 and they were nice, at the same time we pick up 38 hammer speck in the mix, stop fishing at 10:30 them white trout can were out LOL Double rig plastic on the bottom. Unstill next time good luck fishing. Specklesearcher 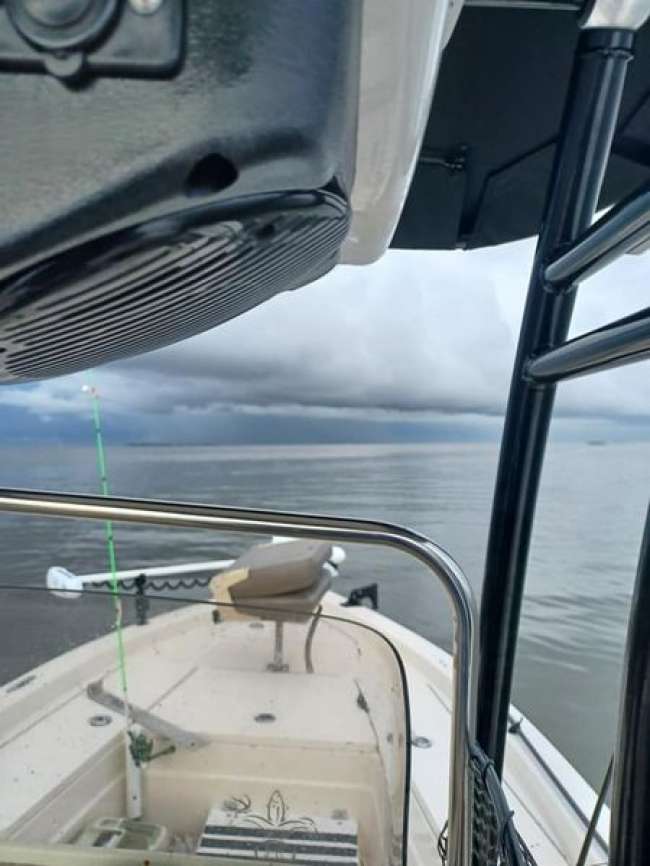 Mother nature did not let us go out in the lake it's the wind was down but the rain was not and when the rain stop the wind pick up to 21mph. Had to stay in the mash and new it was not going to a big hall , but still better then staying home 12 specks and lots of small one to let live for later on, 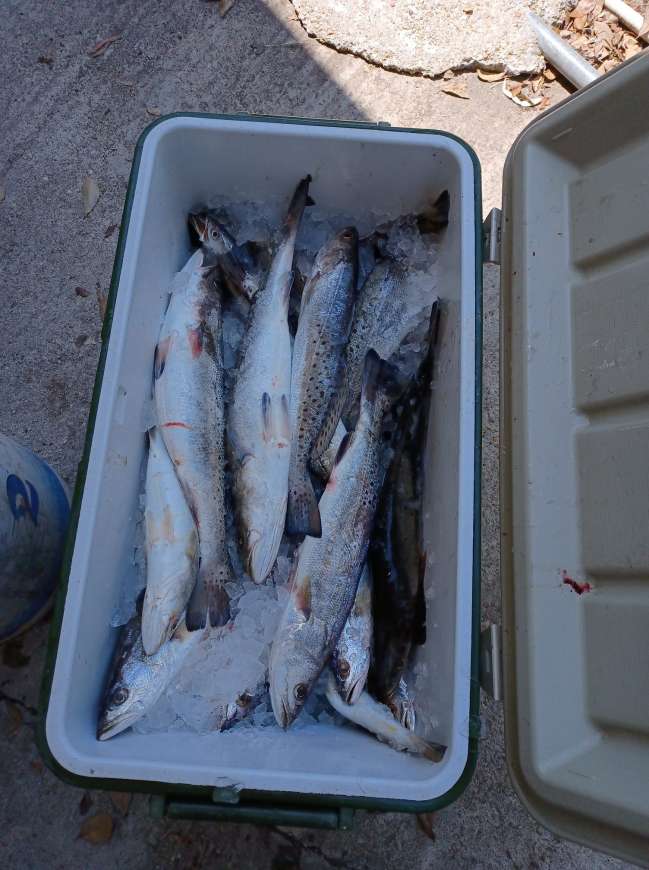 Nice day in Timberlier Bay today, fish bit a little late did not start catching good unstill 11:am, stop at 12:30 with 61 nice trout and left them biting. All on double rig plastic tight line. 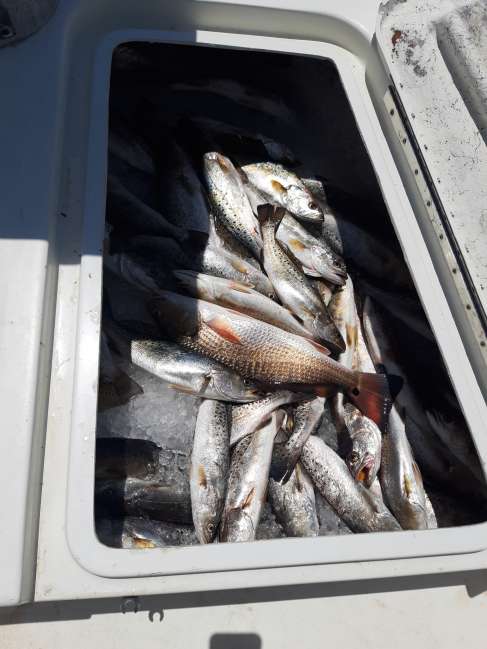 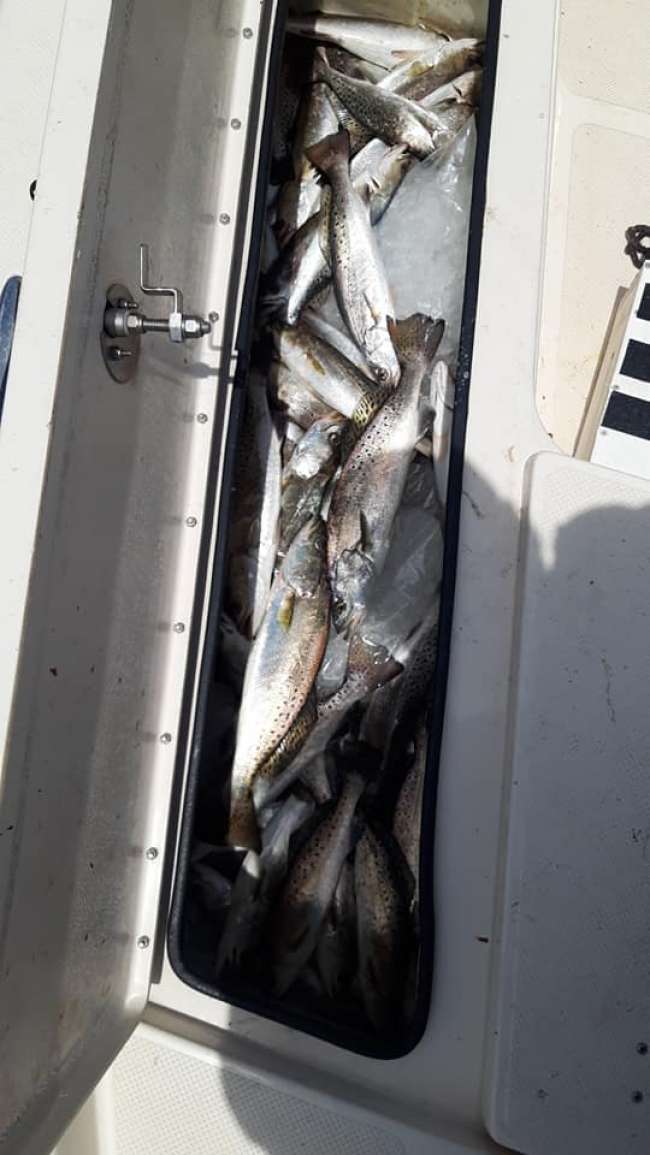 Got a good Sat. Nice day in Lake Raccouric, tight lined double artificial in pink. Got our 50 specks.

May 08 at 5:34pm
Fishing Timbaiaier Bay first time this year 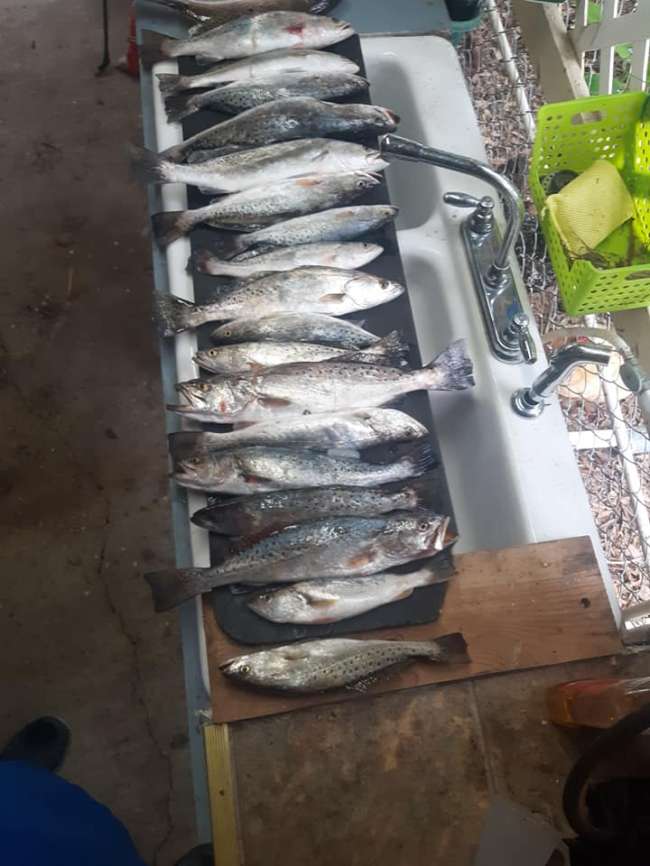 Well it's been windy every Sat, and could not go to the big bays, so we were determinsd to go this Sat. on a super windy day, went to Casttete any then all the way to west Timbaiaier Bay island, took a beating for some nice trout and 1 red. Tight line double rig pink artifficial. West Timbalaier island is cut in several place due to Hurricane Zeta. 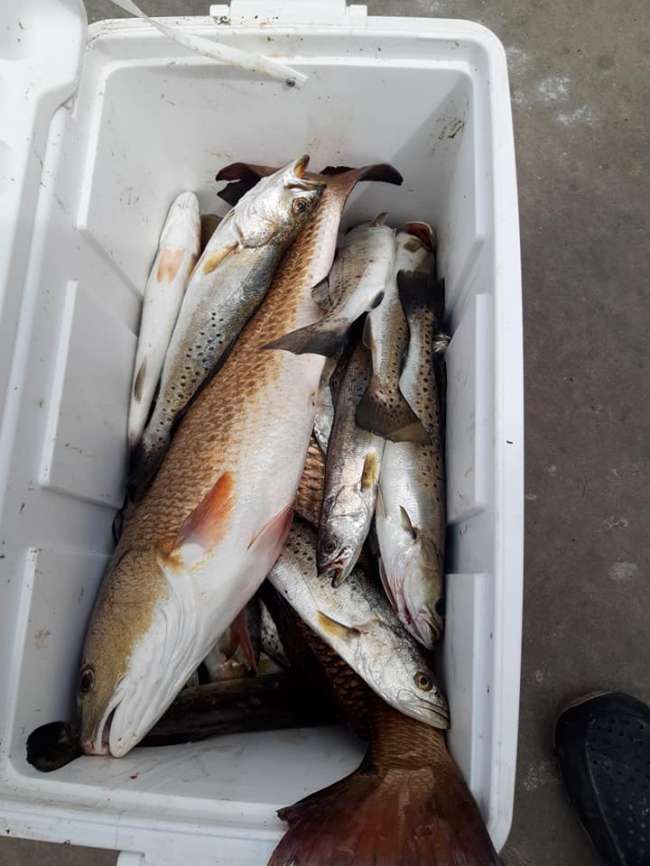 Well we finely got our 24 bay Skeeter back in the water today, Had a very breezy day behind Golden Meadow this morning. Tough fishing had a buddy from Lockport with us today. 25 speck 2 reds and a lot of small one to release, todays bate was smoke split tail grub and matrix shrimp creole Extreme high tide had them in ponds , found a few small shrimp and some eggs in them sigh of good time to come. Specklesearcher 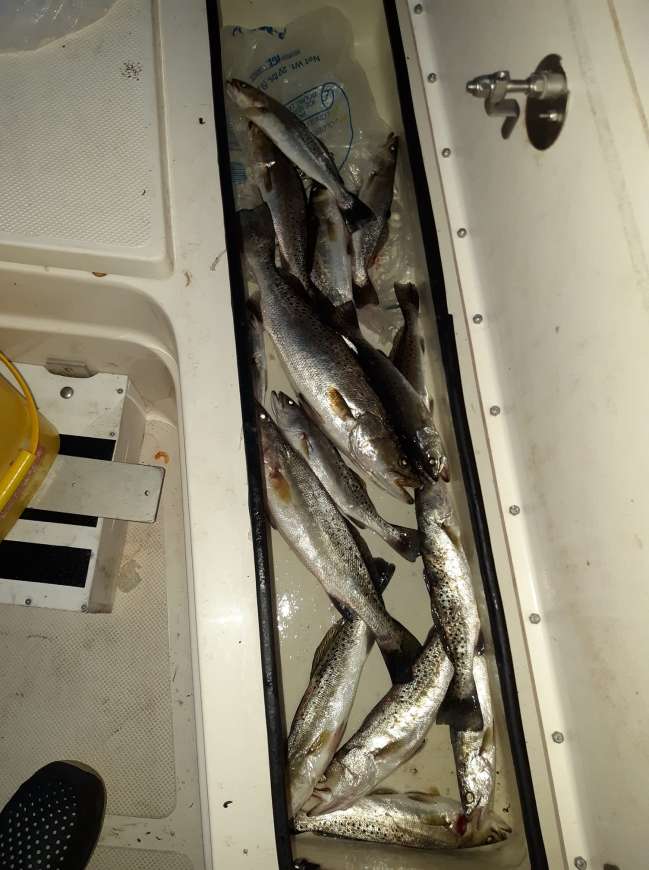 Tough day in Golden Meadow today fishing but still a nice hall had 15 trout , with the warm weather we new the fish would be out of there cold spots, so we fish hard for them in the marchers . If we do not get any good cold fronts we will have fish the month of March real hard ,until the shrimp come out in April and may then we will have to fish the big waters. until next week we will see what it will bring. SpeckleSearcher

February 27 at 10:25pm
a good sunday trip after the cold blast in golden meadow 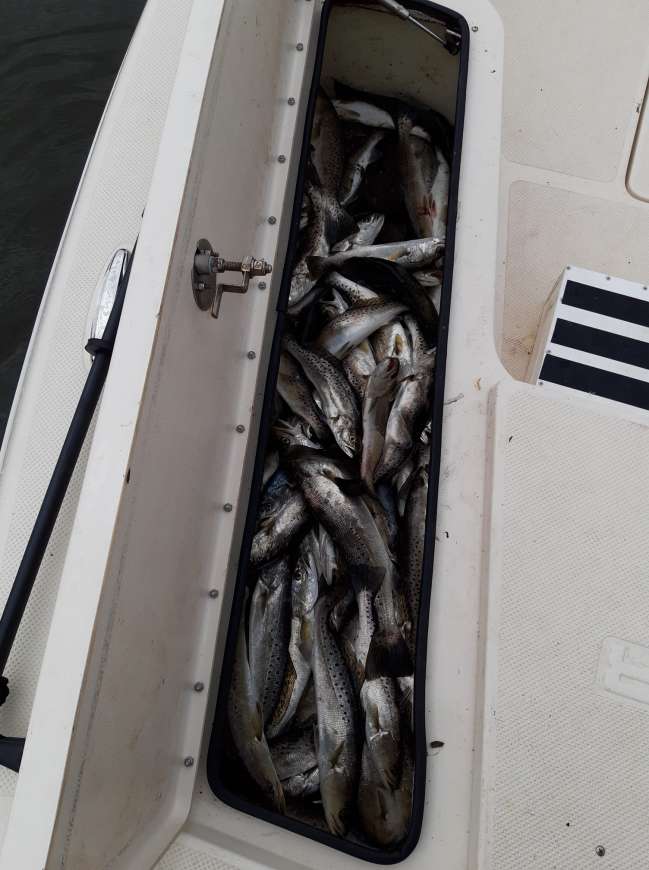 Made a Sunday trip after the cold blast in the Golden Meadow canals had a good friend with us in our 24ft skeeter and racked up on hungry trout 65 and left them biting, all on dsl tight line kickin chicken 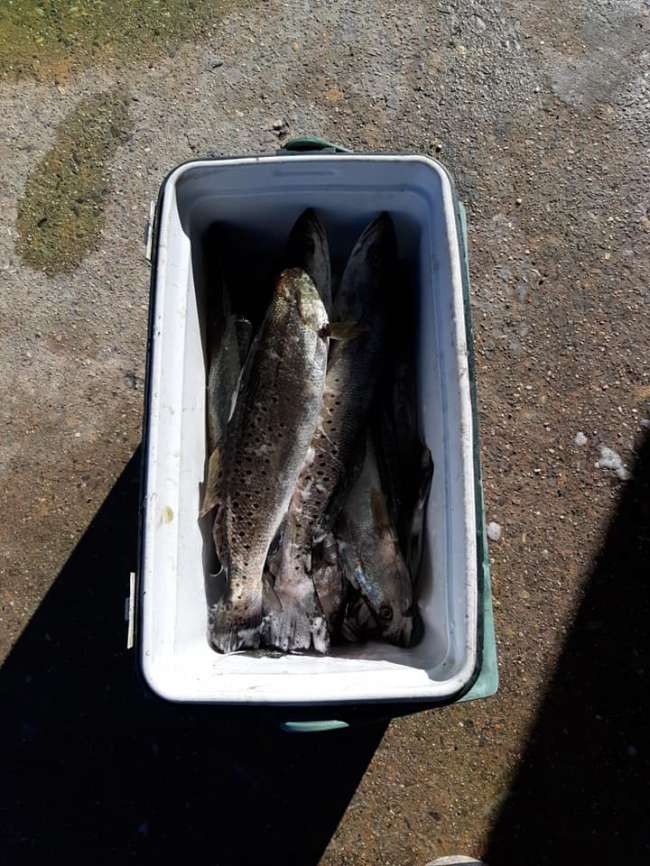 Well we finally got our 24 ft skeeter back in the water , and not a bad trip it was, with the cold temperatures and a 17 miles per wind made for a tuff day to fish, Found a few in the canals in Golden Meadow today , 28 specks 2 reds.

February 07 at 4:59pm
cast and blast day in thick fog in golden meadow 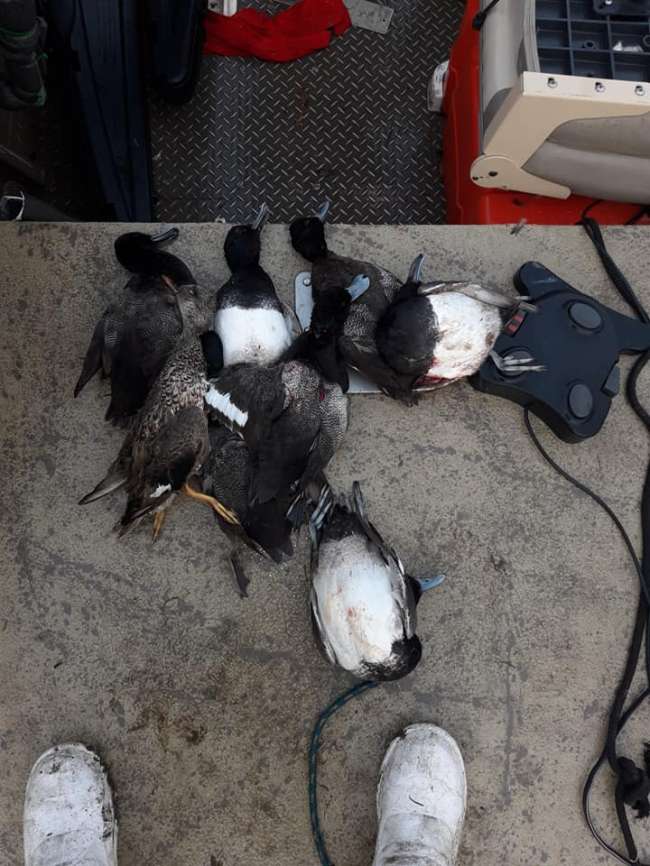 Well the end of an other bad hunting season , hunted Sunday on a thick fog a lot of dogees that been like that all season got one lost gray then we call it off at 7;30 and went fishing that was a little slow but we did not scratch i will give it one more year if it still the same will do a lot more fishing. 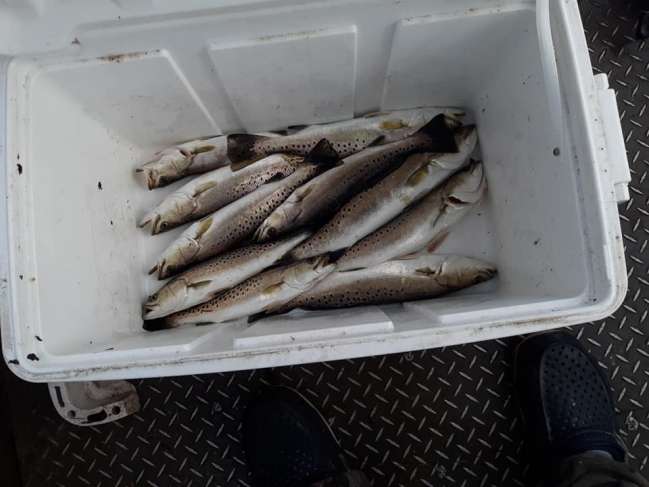 Well the end of an other bad year, hunted Sunday in were thick fog all we had were dogrees and lots of them got one lost gray . Then we went after fish was a little slow but did not scratch, i will give it one more year if it still the same will fish more. 12 hunts 95 ducks and made a coot hunt had 21 ---19 grays 5 teals the rest was dogrees and hoods. 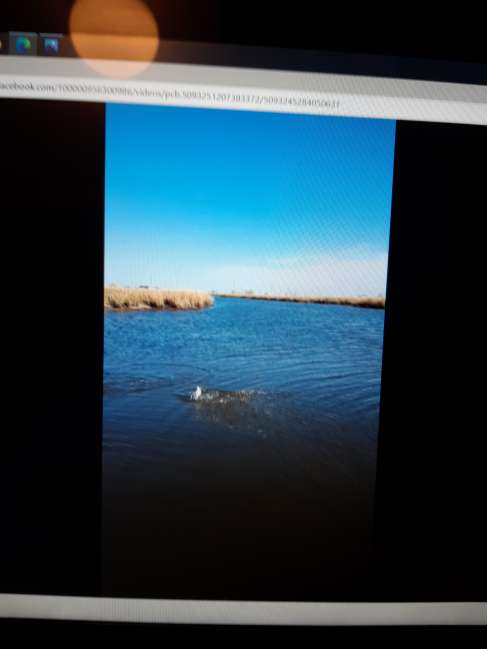 Got our limit me and my son of 50 speckle and 1 redon my 72nd birthday, in golden meadow ,tight line on dsl color x and c. 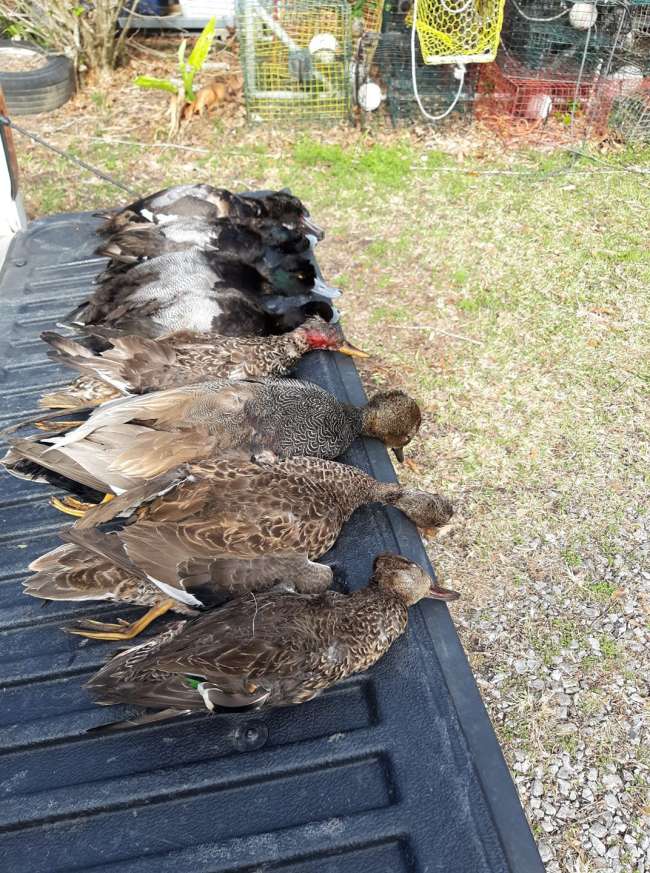 STILL NOT A LOT OF BIG DUCK ,BUT WE SAW A FEW THISMORNING . but the dogrees or still here by big numbers. we had i teal 3 gray and our limit of dogrees 4 not to bad . Specklesearcher 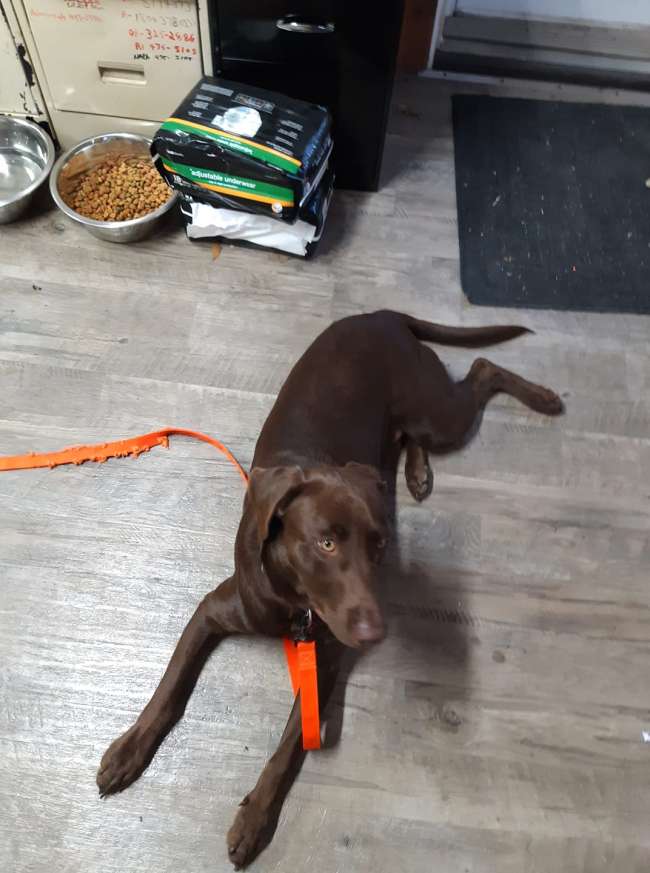 Well i lost my hunting buddy he got out of the pen last friday and got hit buy a car , going to miss him, his name was Rimie

Well in la. speck size is 12'' they or the best eating ,the small one or white trout run 10to 12'' they to or great eating. we release a lot of bull red not that they or not good to eat if you cut out all the red blood meat out they or good eating i release them because they or to hard to fix, keep this one for a good buddy that ask.

The weather is nice and water is clean right know just have to look out for the rain.

I WILL MAKE 2 HUNTS THIS WEEK , THEN BACK TO FISHING THANKS ALL FOR THE HAPPY BIRTHDAY

Sorry not gold , cold did not see that one lol but with that said feed in a short stopper up north ,

Mandevillian sorry for your bad luck, last Sat. made a hunt 0 ducks yesterday had 4 3 doggres 1 teal not good we have not seeine a gray duck come in in weeks with all that gold up north still no big ducks .

Mandevillian Went to day check hunting lease look like the dogrees or back with a few grays and teals will give it a try one this week. So for we had 66 at two in one blind most or hoods and dogrees.

hope they do, we hunt the coast line in golden meadow. that is a nice hunt we have not seen mallards in years down here.

Slow down here in golden meadow ,open day of 2 spilt hunted still 10am 2 man blind got most of what we saw 6

Open day of the spilt not any better for us , a two man blind hunted still 10am had 6 ducks did not see a duck from 9 to 10 am. We had 100s of dogrees the first spilt only to get 1 the whole hunt to day.

Mandevillian it look like we r done here in the south 4 to 5 bad years on little to no big duck coming down all we have is a lot of dogrees and we can only have 1 and now 2 got a few grays at the start of the season. To me the short stop up north is what killing us, they can do what ever they what, plant milo and then flood it plant corn and flood, they or now digging up peanut and flood it , i still say our chance is to b able to feed down here they can say what they want water in the feed or feed in the water no different we need our wildlife and fisheries to help and our representatives and senators to help us . If not it\'s only going to get worse down here for my self i give it 1 more year thin i done, i will stick to fishing sad . O one more i have not even seeing any teal much les no green heads on pintails on wegion we do have hoods.

bate was by Hogie's lures yes water was salty and cool did see a few sting ray and if u would have life bate would of had our 10 reds but we like fishing plastic . we will give it a other trip next Sat. as i have an other duck blind to build but this one is in our other lease in Golden Meadow Specklesearcher

NICE CATCH WERE ABOUT IS YOUR CAMP AT?

still out so i got this 21ft kenner, or we go with a friend in his boat

What wrong with your boat?

thank no nats birds had a hard time lol