Re: Catfishing in response to a report titled:  Catfishing

has anyone bought any sacks of oysters yet?if so where did you get them? how much and where they anygood?

jls!! MIA! whats up with jls? I haven't seen or heard from him in a while. hope all is well.

fished biloxi marsh this morning . we did pretty well.probably could have done a little better had the live shrimp been better. they were very tiny. we had to use small hooks. i bought my shrimp at dockside. while i was getting my 150 count shrimp a local lake ponchartrain guide come to the bait tank and starts cherry picking his live shrimp. now i know he gives dockside more business than i do but it was disheartening to see him do this in front of me. i may go to the other launch next time i go out. am i wrong for feeling like this ? what do yall think?

i see pro ride trls are back in the classifides. i thought they were banned?

i just read on wwl tv that rj and j paul on swamp people were arrested in a store fight. i hope history channel kicks them off the show . i always thought they were smart alecks. never did like them much. all they ever caught was small gators. oh i am sure it was a hell of a fight. as you know jpaul is a warrior . lmao!!!

i have a bay boat about 1 year old. i am starting to get a yellow color on the hull. i am wanting recomendations on what everyone uses to clean wax your boats. products recomendations are also welcomed. thanks.

i had heard from someone that they are building some rock jetties or berms out in lake ponchartrain at or near the tangi river. i was just wondering if anyone had any information. maybe with some structure this may be another place to catch fish on the northshore of the lake.

we went to check out our duck lease in pt.al hashe this morning. marsh looked to be in good shape. ther was plenty devastation in braithway. man it took a hard hit.we stayed out there a couple of hours and did not see not one duck.if anyone else is down that way i would like to hear if yall have seen anything.

i am the proud owner of a brand new 19 ft. bay boat! i purchased the the boat to fish black bay and other surrounding areas. my first venture out was to be sunday 7/08. my trip was to be black bay out of the infamous 'sweetwater marina' ,a place i have used frequently in the past and will continue to use in the future.well the first thing i did saturday evening was join sea tow.then got to thinking about a vhf radio. first and foremost was safety on my mind. i always have my 8 yr. old grandson with me. i am wondering on anyone's experience on vhf radios. i have never had one and would like you guy's advice. thanks ! 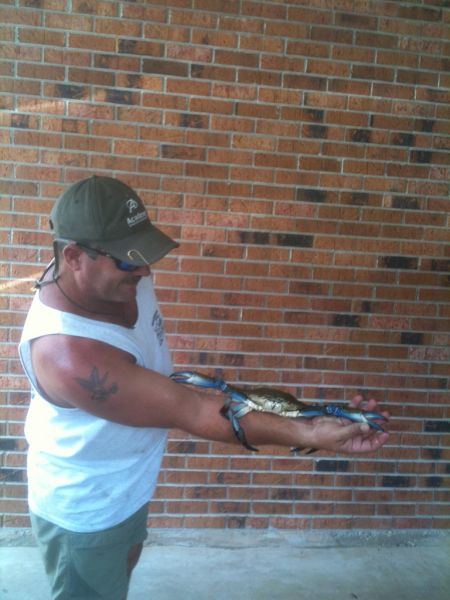 a friend of mine caught this huge crab today. it was 10 in. point to point on the shell and twenty inches from end of claw to end of claw stretched out.he is thinking about getting it mounted if thats what you do to crabs.

i took my son and grandson to do some crabbin in lake maurepas today. we ran 24 nets . we just caught a few and the few we caught were small. when we left i stopped at reno' s to buy some and they didn't have any. they said the crabs had shut down.i did notice a lot of dead pogies floating on top of the water. we may try bayou bieavanue tomorrow. if anyone has any other crab reports i would like to hear them. thanks 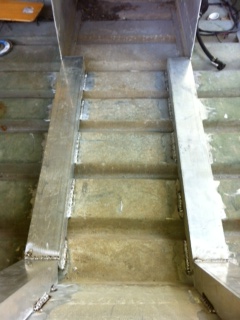 my son bought a miller welder .this is his first repair he made on my flat boat.he removed part of the front seat to create a walk thru. he's gonna build me a deck on the front next week.it doest look to bad for his first time. if he gets a little better he will start doing small repairs.

i have posted an add on the classified section with some pictures and was wondering why my pics come out sideways.is there anyway to correct this, i see some others having the same problem. also i cant post pictures from my i- phone anymore, is there a problem there also . thanks in advance. 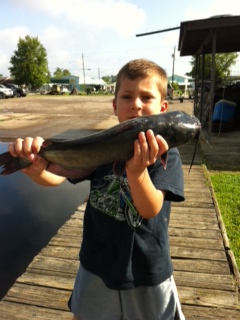 took a quick trip to desallmond this morning with my son quentin and grandson dason. as you would know dason outfished the two of us.

is anyone using a hummingbird 587? i would like to know what navionics map that you are using for the southeast la marsh

launched out of eddie's boat launch on paris rd.we went on a crabbin mission to see if the crabs were running yet. why not everything else is running early this year. i have already planted my vegitable garden already, a month early.put out a dozen nets inthe dyke canal( always wondered why they call it that).well anyway we baited up with some trout heads from fish we caught out of sweetwater last fall. we made four passes and caught one crab. picked up and went home . will try toward the end of april.

cap paul, i have just purchased a hummingbird 587 combo.what would be the best base map to buy? i just fish southeast la.

March 01, 2012 at 2:49pm
A comment titled: Re: Catfishing in response to a report titled: Catfishing

sorry I didn't take any pictures, but we fished lac des allmands over the weekend and it was game on for catfish. we could have caught all we wanted. the spawn is on as the females were full of eggs.

I am going to go by gus and pick up 3dz of his deep water crawfish nets. going to take the godevil boat and load up the 1983 chapman pirogue and find a place to take the grandkids.

should be good crawfishing season.mild winter and plenty water. do you crawfish pearl river?

NICE , LOVE MY CHAPMAN, STOPPED BY THEIR PLANT TODAY, I NEED SOME REPAIRS ON MINE. THEY OFFERED ME A LOANER WHILE MINE IS BEING REPAIRED.

I just replaced my switch. was not comfortable with it not working

I need som easy access to some palmettos . I am near Madisonville thanks tom

great hunt. we didn't do so well in pt ala hashe only saw one duck.

what is the st Bernard seafood pilot program . where is the Delacroix pier?

I will be fishing the vasherie side. I have a camp there.

December 18, 2017 at 8:17pm
A comment titled: Re: Catfishing in response to a report titled: Catfishing

where are you fishing ?I have a camp in des allmands and we have been catching a few.

I believe that's the same place

there is a crab dock right there in Delacroix . you can buy all you want . I have bought them there before.

Try putting a small cork above the bridle. That may help. Also if y'all enjoy crabbing , invest in some good nets. Gus in Slidell sells them.I have homemade nets that are 40years old and still as good as the day that they ere made.

Yeah,dontshÃÂ¤re.some poor little kid might have some fun and catch all the crabs.

not wanting your exact spot but wondering what area. I have just bought a camp on the vasheria side of the lake. no luck yet on bream or sacs. any info is appreciated.

Delacroix lodge. I have stayed there several time and have had no complaints. very clean and reasonable.

tom1959 has not filled this section yet.