Buck of a lifetime

Buck of a lifetime 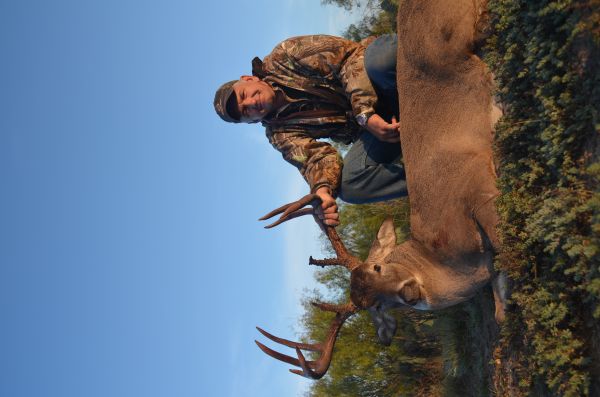 Got to make a deer hunt of my lifetime this past weekend. Saw zone buck that were pushing over 190'. I killed this nice 164 1/8' buck. My heart was sure pumping after the shot.

Anyone know of a good guide in Gulf Shores for an inland trip? My daughter is getting married there on April 26th. Would like to go on a trip on the 24th if possible.

What are all you Mercury Optimax Pro XS owners using as additives for your gas? 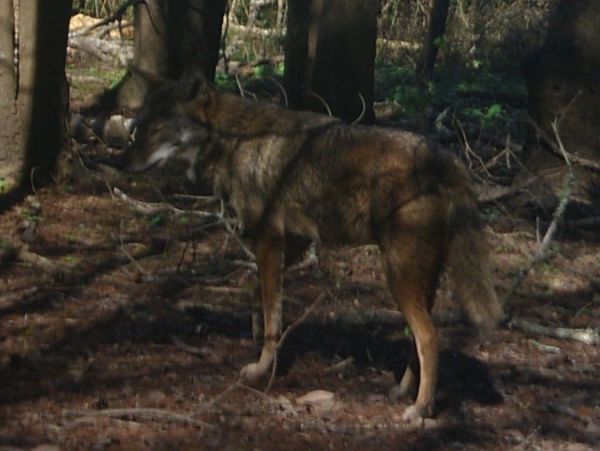 Have a few people say this is a wolf. Do not think so. 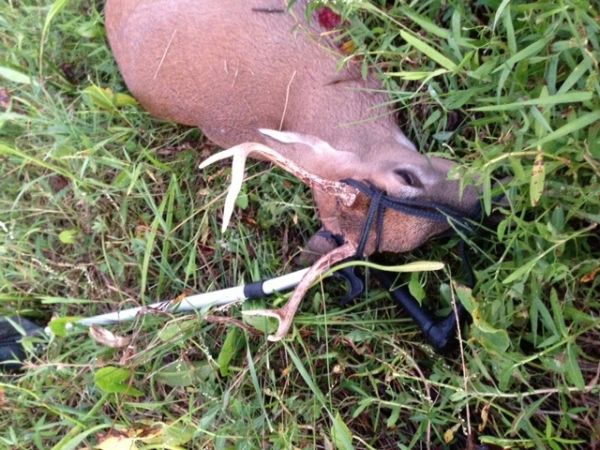 Not a monsters but fresh backstrap for supper tonight. 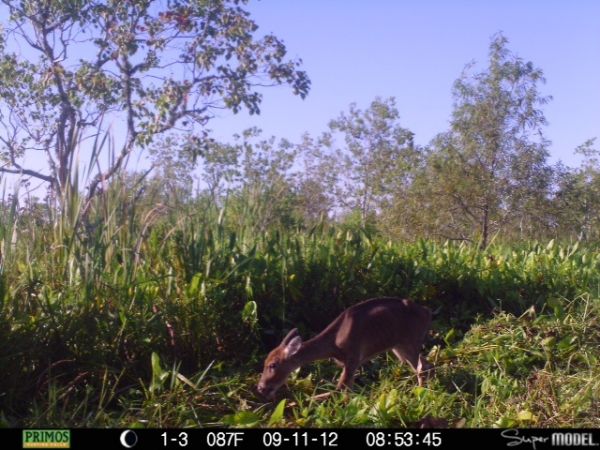 Hate seeing this picture on trail cam. We had also found a young deer dead last month. Talked to someone at Gary's Landing and they said 5 have been found on refuge.

Hey Guys. I am going look at a new Forest River Sunseeker RV at Berryland this week. Has anyone had a any good or bad deals with them or this brand of RV? Looking at a 24 foot.

Well made it to South Toledo Bend State Park today. Fished for 4 hours with only a hand full of bites. Tried spinner baits, crank baits and a couple of worms. Only caught one 13' bass. Wind blowing like hell. Looks like it will be worst tomorrow. Anyone have any idea what bait to try?

Went out on Lacassine marsh today. Did not see many ducks or much water. Anyone hunting there this weekend better be ready to do some walking. We had to drag the canoe most of the way to where we normaly hunt. Sure hope more water and birds show up soon.

Does any one know where I can find either a 270 or 30-06 stainless Steel barrel for a Knight KP1? New or used does not matter as long as nothing is wrong with it. Thanks

Read this on local news website. Lawmakers want control of everything now..

BATON ROUGE, La. (AP) - Lawmakers would oversee the setting of hunting dates and limits under a bill advancing in the Senate.

The measure by Sen. Rob Marionneaux of Livonia would replace the seven gubernatorial appointees on the Wildlife and Fisheries Commission with a panel of 2 dozen lawmakers.

The commission sets the season dates and restrictions each year for everything from hunting ducks and deer to quail and turkey. They also oversee fishing regulations.

Marionneaux says lawmakers receive complaints when constituents are unhappy with a commission decision. So, he says lawmakers should make those decisions instead.

The Senate Natural Resources Committee voted 4-2 to send the legislation to the full Senate.

I see were Dennis Tietje is in 5th place after day 1. He weighted in 5 fish for 15.4 pounds. Great start for his first day fishing with the big dogs. Dennis is a local guy from here in Southwest La.

Needing a couple of Trollong motor batteries and also a cranking battery for a GatorTail GTR35. Wanted AC Delco for trolling batteries. Anyone know the best place to get them around Lafayette?

That has to be the worst call ever by a head coach EVER. How is your field goal team not ready. Heads need to role for this kind of play calling.

Well there were plenty of hunters and very few big ducks out this morning. We killed our 2 man limit by 7:15 this morning. All Blue Wing Teal. 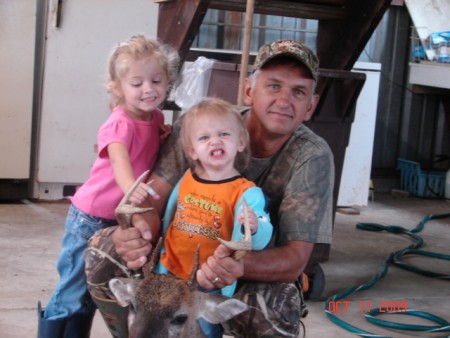 Not a monster but not bad for a marsh buck. 130 pounds and 8 points. 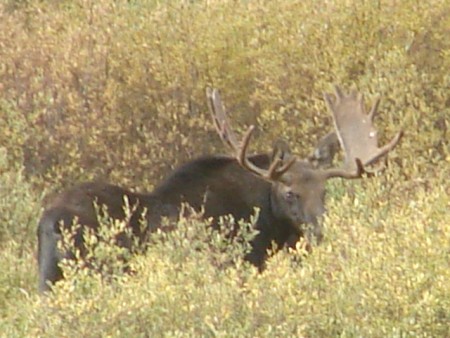 I'm working in Colorado for a couple of weeks. Today I went riding because I had the day off. Finally got to see my first Moose. Man is that ever a big sucker. The picture is not great but you can tell he is one nice looking bull. I have also been seeing a few Elk and Mule deer. I'll try and bring some of this cool weather home with me for all of you guys.

I was working the last few days at ST-54 B platform. They were tearing ip the red snapper and mangrove there. Also under the platform they must of been 100 huge Tarpon just hanging around. My 1st time seeing tarpon. Also had several Sea Turtles hanging around.

Anyone on here from southwest Louisiana have any old deer antlers they would like to get rid of?? They do not have to be trophy size. I'll take spikes or what ever you have laying around. Thanks just let me know if you have any. 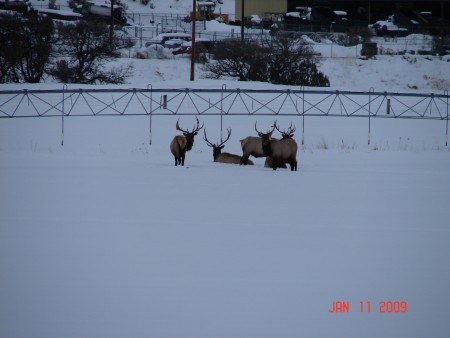 Here are a few more pictures I took today.

We make patties out of the. Boiled potatoes, onions and seasoning. I'll try to get recipe if you want it.

It's going on our living room wall. Brought it to taxedermist last night. Going back an pickup the antlers tonight till he is ready for them.

Killed on a private low fence ranch in SW texas

December 08, 2014 at 8:53pm
A comment titled: Trip in response to a report titled: Sherbune south farm

May try to take the grand kids later this year. Would not save money by going. But would like to see them see how we used to catch crawfish years ago.

What type of nets do you use if the water is deep enough for waders?

March 29, 2014 at 7:18pm
A comment titled: Bank fishing in response to a report titled: Fishing in grand Chenier

You can fish just north of river bridge. Also at refuge on Price Lake Road.

Lacassine pool. You can fish along the road.

Texas does not have a blind in every field either.

March 23, 2014 at 11:24pm
A comment titled: charter in response to a report titled: Looking for a Toledo Bend Crappie Charter

Farming pratices have changed alot in south Louisiana in the last 15 years. Marsh ponds have changed alot also. Plus hunting pressure. Not saying those are the only reason for lest ducks, but they sure are not helping. I've also been told most ducks will not eat most of the rice being plant here now. Not sure if this is true or not. But I do know you do not find much rice in the ducks like years ago.

I read somewhere he is only running to help Mary out. Figures a lot of people will turn out to vote for him and the normally vote Dem. So while they are there voting for him, they will also vote for her. LOL

March 21, 2014 at 12:16am
A comment titled: Farm practices in response to a report titled: Ducks Unlimited

Farm practices have changed a lot also in the last 10 to 15 years. In SW La we have more sugarcane. Not many ducks landing in there. Also crawfish ponds. The farmers will do every thing they can to keep geese out of the crawfish ponds. Also the second crop rive that is harvested. Go look behind the combines. I bet you do not find much rice on the ground. These new combines do not waste no were near as much rice as the old machines did. So you ended up with a whole lots less food for the ducks. Even out in most of the marshes you do not see as much feed in the ponds.

January 14, 2014 at 7:27pm
A comment titled: Pressure in response to a report titled: View from Gueydan

I think hunting pressure has a lot to do with the shortage of birds. 30 years ago we did not have a blind in every field like we do now. Also I think farming practices have changed a lot in this area in the last 30 years.

January 07, 2014 at 9:07pm
A comment titled: Perfume in response to a report titled: Females hunting deer and their scent

No perfume or body sprays. LOL

I think most are nice guys. They are just doing their jobs. Sometimes I think it's the way people talk to them. Not always thou.

Need to sharpen that knife. LOL

You can camp at Meyer's landing and hunt Laccasine refuge.

June 16, 2013 at 12:28pm
A comment titled: Crabs in response to a report titled: dispute of boiling crawfish

Guess you can always learn something. I have been boiling crabs for over 35 years and have never even heard of anyone purging crabs before.

May 22, 2013 at 9:48pm
A comment titled: Crabs in response to a report titled: dispute of boiling crawfish

How can salt water purge crabs? They live in salt water already. I use to purge crawfish years ago. Found it was a waste of time. For crabs I will take the water hose and rinse each crab. Some people laugh but this washes the mud off the bottom side.

I was told Big Bass has it and there is suppose to be another one around 1215 area.

papa-p has not filled this section yet.