Interesting survey looks like statues aren't the only thing about to be hauled away unfortunately.

WL&F should seriously consider shutting down the upcoming deer season in the areas affected by the GREAT FLOOD OF 2016. I have hunted all my life but I think we should sit this one out. Fawns are dropping as we speak and i'm not a biologist but I would think they need dry land for survival. Blue tongue and other diseases I would assume will wipe out a large number of the population also due to overcrowding. I'm sure this probably will go on deaf ears due to economic impact and certain individuals desire to kill, but does anyone else even remotely agree with me?

Anybody else think Area 6 and 9 deer season dates need to change?

Sam Hamilton, the former director of the U.S. Fish and Wildlife Service, called

invasive species 'probably the single greatest threat in our country to our native wildlife.' This is what happened to the game especially wintering ducks in southern Iberville Parish. Read the full report ON INVASIVE SPECIES from The Louisiana Sportsman homepage.

Mr. Larry Reynolds are anyone who has hunted south farms this year how was the first few weeks and how do the ponds look? I got picked for the lottery hunt on the second split and was just wondering. Any info is greatly appreciated.

Anybody with any reports from south farms? How do the ponds look and did anybody hunt it for the opener?

Saw two woodcocks today on different ends of the lease I can't remember seeing them this early in the year since I was a kid. Looks like it will be a brutal winter which I have no problem with. Started noticing Robin's about a week ago which seems early also.

The real hunting season begins in about 1 hr.

Anybody have any maps of the proposed areas of still hunting only for Iberville parish I couldn't find anything on LWF's website. Thanks

Hello fellow sportsman I am in need of a new shotgun for ducks I have narrowed it down to Benelli or Browning and want be swayed from the two. I know the Benelli SBE2 is proven but has anyone hunted with the new A5 because I have my dads 1953 version and used it as a kid to hunt with no problems and if the SBE is not hands down way better I would like to give the new A5 a chance. All opinions will be appreciated but please don't comment on any other brands as it will be one of the two I have listed that will be purchased. Thanks

Mr. Larry Reynolds with the last few cold fronts how are the South Farm ponds looking. I got picked for the opener lottery hunt and was just wondering have the numbers picked up since the last time you commented. Hope to see you Saturday.

Does anybody know if nutria eat Salvania?

Any word from the south farms of Sherburne how are the ducks looking and have pit blinds been installed any information is greatly appreciated.

Fellow hunter's I have been selected for the lottery hunt in Sherbune at the beginning of Dec. and (my buddy) on new years eve I was wondering do we need large decoy spreads mojo's and waders? Also this may be a crazy question ,but do you think the flood helped the hunting out by flushing the ponds of bad vegetation etc..? Thanks for any responses they are greatly appreciated.

Made this bad cast in March and interesting things happend. 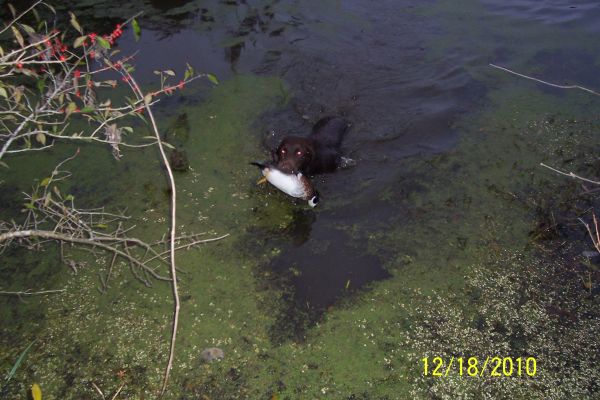 Question for the waterfowl hunters I am interested in a new auto 12 gauge for the upcoming season chambered in 3 inch with a 28 inch barrel. I am thinking and leaning heavily to the Franchi I 12 ,but will consider the Browning Silver as well as the Berreta have any of you had any dealings with the Franchi all comments will be appreciated. P.S. I hunt timber mainly and have zero use for 3 1/2 inch chamber so no Binelli for me Thanks guys

Me Michael and Larry had the pleasure to stay and hunt at the Bin There Hunting Lodge on Monday and Tuesday in Welsh. We didnt fill our limits on geese or ducks, but we had a great time and the guides Preston, Mr. Mike and Dave where top notch as well as the camp. I am looking forward to going back and would recommend this guide service to other hunters.

Anybody do any good in Welsh this weekend?

Hey guys I was wondering if any of you have any experience with slug guns? I will be getting a H&R 20 gauge from Santa Clause. I think this will be a good swamp gun where tracking may not be necessary. Any input would be appreciated.

Man them swamp people back to unsafe acts again shooting gators in the boat that bullet could ricochet and hit a near by perch jerker.

Best crabs you will ever eat however not a reliable source. Hurricanes seemed to have caused the decline.

Haha at least you got some. Area #9 had the worst season in recorded history. I'm not a biologist, but I suspect when you loose an entire FAWN CROP due to the ' Great Flood of 2016' there will be repercussions in future seasons. Interesting developments I'm sure will come. CWD fast approaching an already depleted deer herd. State should be proactive versus reactionary. IMO

When the Lower Grand River @ Bayou Sorrel water level reaches 8.5 feet Area #9 should be closed until the level recedes to 8 feet. Very detrimental to the herd!!

I usually throw my spit bottle in there direction or run a flatline through one of them. They will move I promise.

Hopefully not a cowardly hunter in your area. My Kiefer pear trees felt the pain of such a despicable act.

Well the numbers are in and as I figured the flood had a negative impact on the season. Area #9 was way down compared to recent years. Not many yearlings running around either. Maybe next year. Oh wait i forgot about the yearlings.

Let me backup on this post and do something I should have done from the get go. I am not trying by any means to undermine or belittle the human devastation which has occurred recently from this historic event. I hope the people viewing this made it through this terrible event with as much fortune as I have. I strongly feel the need to report on this now rather than later when there will be no evidence to support my claims. Huck I went to the lease today. I found a few fawns on the shoulder of the highway and they surely weren't frolicking. I'm sure if a car doesn't get them a coyote will. If this water doesn't drop fast and I mean SUPER fast all fawns may be lost in my area!!! I didn't make it very far today and will do a little more investigating tomorrow. I stayed mainly on the main roads and don't want to push the interior because I fear I may do more damage than good by disturbing the few high spots I know of. I will check in later stay safe out there and my condolences go out to those affected by this terrible event.

Probably using muscles you haven't used before. Keep shooting should get better before Oct. LOL. No seriously hopefully its just a strain or something simple.

VANILLA LACE OR AMBER ROMANCE lotion from Victoria's secret. You will smell like a female, but I promise you a gnat will not get within five feet of you.

Captain Kim for sure!!!

Thanks for the education vicious.

Couldn't have asked for a better time for this rain. The woods are starting to green up and the moisture will provide whitetails with vegetation that is super high in protein. The biggest factor to good horn development is moisture level in the spring. Thank you Mother Nature!!

Awesome buck congrats! I will take height over spread any day.

JMO hunting has become a who can put out the most feed sport (which I am guilty of). Back when my club could still run dog's we saw way more deer than now. The difference is instead of pallets of dog food there are now pallets of rice brand in there place. I don't think the number of deer has decreased. I think its more of a problem of feeding them to the point that they become completely nocturnal. I'm in no means saying I prefer dog hunting versus still hunting. I can only report what my boots on the ground have observed. We kill roughly the same amount of deer now than we did when we where dog hunting. However I will say that when we ran dog's the group would kill larger bucks on average than we do now. Because one things for sure nocturnal or not when he goes to stinking he becomes vulnerable to a hounds nose.

Soybeans are very high in protein and will add body weight as well as antler mass. They are also very good for lactating doe's. I keep a bossbuck feeder full from March until September and they eat roughly 350 pounds per month. The squirrels get some, but the coons refuse to eat them. I tried actual protein feed and the coons loved those pellets more than corn. Good luck

The only good thing that ever came from Brazil is the BUTT LIFT.

16 gauge full choke for me personally

vineytree has not filled this section yet.