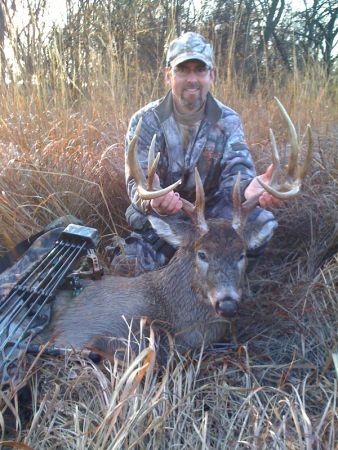 Video in response to a report titled:  Recurve Kill

Here's the self filmed footage of my buck I killed Nov 16th.

Didn't get the buck kill on video but that's how it goes when trying to film yourself. 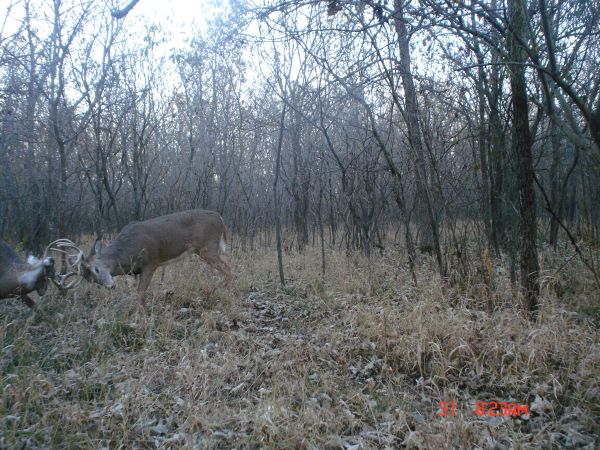 Got this pic in Nebraska 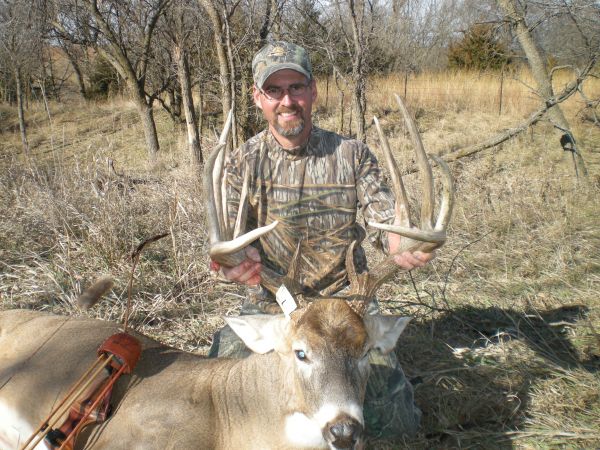 Well let me start off by saying I'm humbly Blessed by the good Lord!
I have trail cam pics of this Kansas buck back from 09. Didnt get any of him in 2010. Thought he got killed. I hunted a spot this morning that I had pics of him but I only saw one young buck. At 9:30 I decided to go scout a little knoll that jutted out into a cut bean field. I never hunted this little corner of the farm before because there wasn't much to it. The closer I got to this knoll I realized it was the perfect spot for a buck to bed up. It was only about 3/4 an acre but it was on a high vantage where he could see. It butted up to a CRP field. I knocked an arrow and eased along looking for tines in the grass. I was about half way the knoll to the CRP when I looked ahead and see a Huge Rack coming my way. I crouched down and got ready for a shot opportunity. He strolled up to 20 yards and looked right at me. I thought it's now or never man! I drew and let the string drop and he wheeled and tore otta there! I knew I had hit him so I ran to see where he was and he had stopped on the woods edge across the field. He stood there twitching his tail, then I saw him stumble!!!!
He walked into the edge and flopped down. I took a seat and watched him for an hour. Then I knocked another arrow and eased up on him. He was Done! I dropped to my kness, Thanked the Good Lord with tears streamimg down my face. The buck of a Lifetime and with my Zona recurve to boot. He was 288 pounds on my Moultrie Scale!
Gross score 183 5/8

We all know the basin deer herd was hurt bad by this years flood. The LDWF said they knew the herd was down because of reports from we the people who hunt there. I went to Baton Rouge and voiced my concerns to the commission members that the Attakapas wma herd was very low for the last few seasons.
How come only Sherburne wma had many modifications to it's season's.
Only two days of Pimative either sex. 7 days of BUCKS ONLY Primative hunting on all other lands between the levees.
Can someone explain why the Attakapas wma has 7 days of EITHER SEX primitive hunting late season when the river will likely be high??????
Does the LDWF realize what's about to happen? As if the herd wasn't in bad enough shape already!

I can't believe that more folks have not committed to go to this meeting to help fight this proposal that will pretty much end bowhunting only days in Area 1 + 6!

And who's to say that if this passes, the wma leaders don't say well the folks in this area approve of more gun days! Let's extend the late season to have a month of Primative hunting?!!
Look at Sherburne! They already have a proposed 11 Either sex days for this coming season!

Wake Up Louisiana BowHunters!!!!!
Basinboy Out!

Please read all the way to the bottom below Dave Morelands suggested season changes for area 6.
If you agree to the suggestions made by "we the hunters of area 6"
please sign the petition. This looks like a decent compromise. Click the link below.

This is the ink to her bow kill.

This deer came in down wind and held up at TEN yards facing Tyra.
A farm truck came clattering down the road and he swapped ends and was gone! 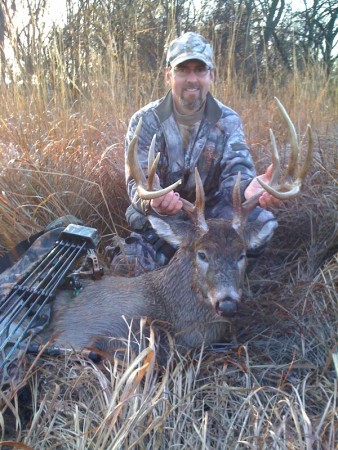 Well Folks,
At 6:56am on Nov 12th it all came together!
The big boy came by trailing a doe that had got ahead of him and out of his sight. I grunted him in and shot him at 15 yards! He bolted back the direction he came from. After a 70 yards dash he stopped and looked back, then tipped over! What A Feeling! I nearly passed out!
I was in North Central Kansas on private land I have permission to hunt in Washington County. 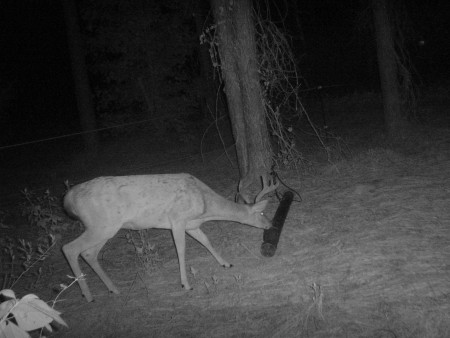 This buck needs another year or two! I sure hope he doesn't come by my bow stand! LOL!
I like to see twins! 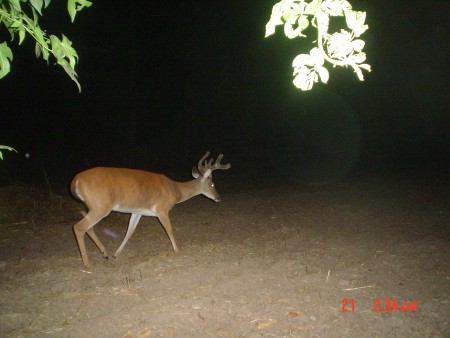 Went to the lease to check on the food plots. The deer are hitting them hard. Them beans and peas won't last long! 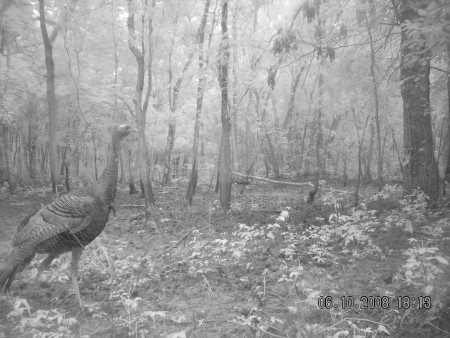 I have never saw a turkey myself, but have talked to a couple folks who said they have seen them on the wma. Just curious if anyone else has seen them.
I checked my trail cams this weekend and have proof that there is at least one jake on the Attakapas wma! Wouldn't that be sweet if they populate enough for us to have a season here! 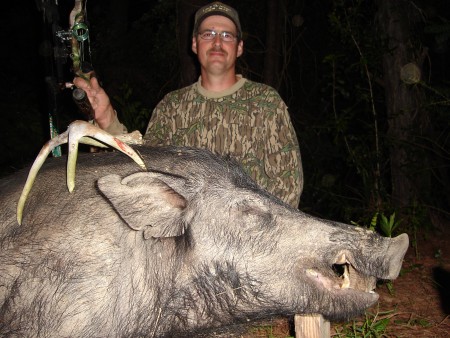 Snooks and I headed up to the lease Monday to try and get some work done on our foodplots. We left town at 3pm and drove onto the lease at 5:30pm! We wanted to try and sneak in a hog hunt while there. We geared up and headed to our stands hoping the hogs weren't already there. I was barely settled in my stand when I hear BOOOOOM!!!!!
I received a text message from Snooks saying "Big Sow Down!" He said they were already at his feeder when he got there.
I settled in hoping I would soon have some action myself. Wasn't long and I heard a branch snap! Then I heard footsteps in some water. Then it was quiet. I waited patiently. ::)
Then out of nowhere. There stands a Big Hog in the brush to my right!
He fed in the brush not giving me a clear shot for a while. Finally he came out in the clearing under my feeder. I waited until he was slightly quartering away and drew my bow. I settled the pin tight behind his shoulder and hit the trigger on my release. Whaaack!
The shot was perfect! ;D I could see blood spraying out as he tore out of there!
I waited till dark before getting down. Snooks came meet me and we found blood at the point of impact. The blood trail was easy to follow, blood was spraying everywhere. Even on the trees a foot off the ground! He went less than a hundred yards. My best hog ever! 245 pounds! :)
While trailing I found the shed antler you see in the picture. A great hunt!
Here is a video clip from my trailcam just before I shot him. I was hoping it caught the shot on film, but it wasn't to be. :'( 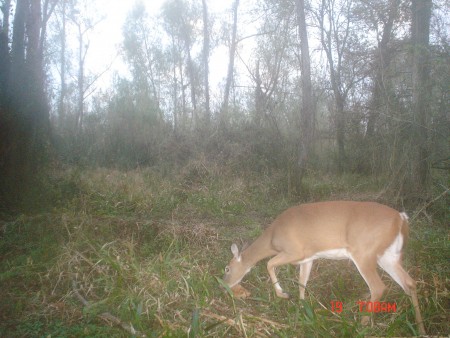 Deer are moving in the Basin. Seeing scrapes and rubs. 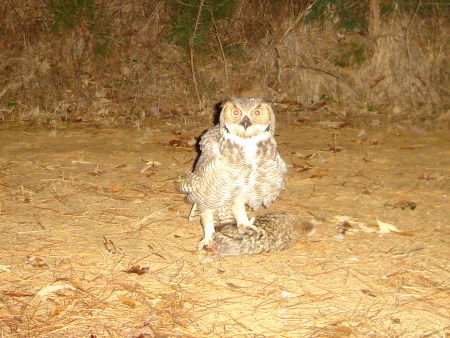 I was walking out the woods last night after a hunt and came across a rabbit dead in the road with no head! I wondered what had left its kill behind? I made the hike back and setup a SG-6000 on the rabbit kill. This morning I checked the cam and was surprised to see this fellow! 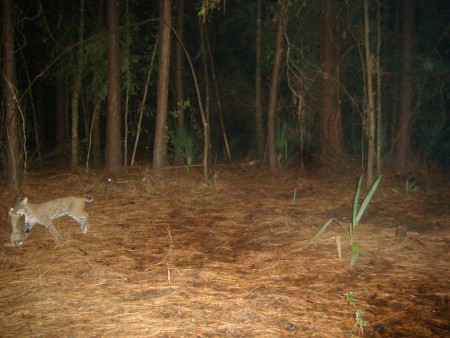 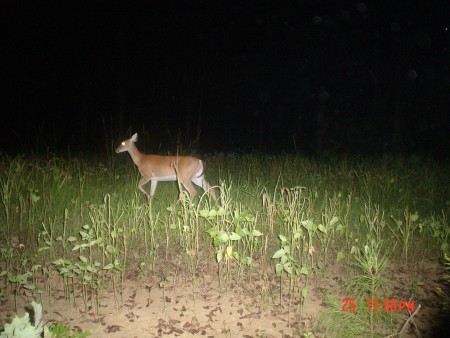 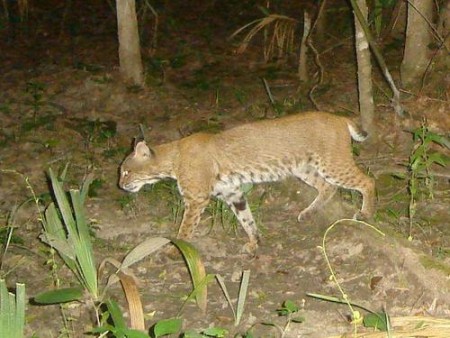 Here is an example of how well the 6.0 cam holds it's detail when zooming in and cropping a picture. 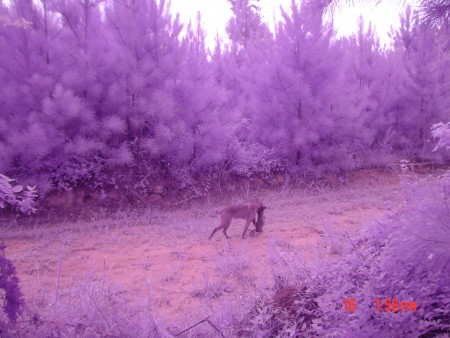 Look at these two pics. They look identical, except they were taken 5 hours apart. The cat is in the same stride with legs in the same place. And it has a rabbit in his mouth both times! Pretty Cool! 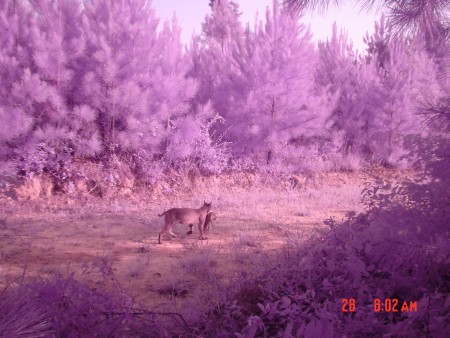 This rabbit didn't make it!

I'm using a Panasonic GS-500 camera on a home made tree arm. Takes great video. I'm about ready to upgrade if I can sell this one. My recurve is a Zona Custom 52#@26' 58'amornI hope to see you guy's at ARTAC this spring/summer. Thanks

Congrats on getting their first kills on video! They did a great job!

December 20, 2011 at 8:15am
A comment titled: I agree in response to a report titled: New deer-hunting season dates for the Atchafalaya Basin

I would have liked to seen the season closed on the attakapas and Sherburne for a season or two.
If the mortality rate was 30% north of I-10, what do you think it was farther south where there is less high land? Not good!
I spoke to a few crawfisherman that saw dead deer floating in the swamp. It will take a few years to rebound for sure.

July 07, 2011 at 9:55pm
A comment titled: Changes in response to a report titled: New deer-hunting season dates for the Atchafalaya Basin

I would give up a couple seasons to see the deer herd have time to rebound. I hunt the Attackspas wma and I know it went from 28,000 acres to less than 50 acres of dry land. The herd was already in despair before the water came up. I sure hope the LDWF closes it for a couple years.

July 07, 2011 at 11:22am
A comment titled: Season Changes in response to a report titled: Atchafalaya Basin deer hunting

Something definitely needs to be done. It has been bad the last couple of seasons and now with the record high water pushing most deer out and drowning a bunch. I was hoping they would close the Attakapas wma for a couple of years.

Thanks fo the report Andy

You are correct cajun! Apparently I'm not the only one who has seen what "Every Day's a Doe Day" in the Basin has done to our deer herd. Now the LDWF wants to add more Gun/Primative days in the late season.
I have a lifetime La license for sale at half price if anyone is interested! Won't be needing it if there are no deer left to hunt!

Something to look forward to for next season for sure Mike!

I will be at the next meeting march 4th and will try to gather data to bring. If any of you have pictures of fawns late in the season or big pregnant does late into oct and nov please send them to me along with the part of area six they were taken. Of course they need to have the correct dates on the pics. Also pics of bucks still packing antlers in march! I will also be circulating a petition hoping to get signatures of folks in favor of pushing the season back so we can get in on the rut action. From the folks that I have heard from thus far it looks like hwy 90
should be the line that seperates area six.

February 05, 2010 at 4:31am
A comment titled: Congrats! in response to a report titled: Best game warden I ever Met

That is a great buck! Congrats!

Yes 8point I'm hunting in the basin still. Been trying to get one with my recurve! Deer 3, me zero lol
I won't give up though! The rut should be starting and I will be after them like white on rice lol

I can't speak for the entire basin, only for what I see in my area.

I hunt the attakapas wma and this is the worst I have seen it since pre Andrew! There just aren't the deer this year like we have had. To many deer being killed during the either sex " primative" weapon season when the water is high. I think the "primative season should either be moved up earlier or make it bucks only especially when the river is up! We are seeing the results from last years slaughter!

I'm addicted to deer and hog hunting with the bow!
Recently got into Traditional archery and 3D shoots.