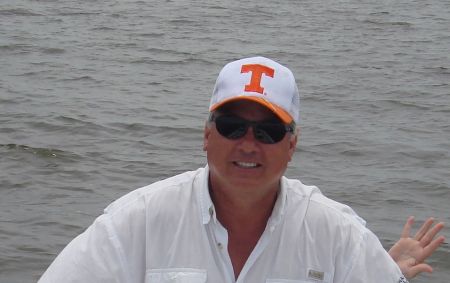 Re: Nice Sow in response to a report titled:  Nice Sow 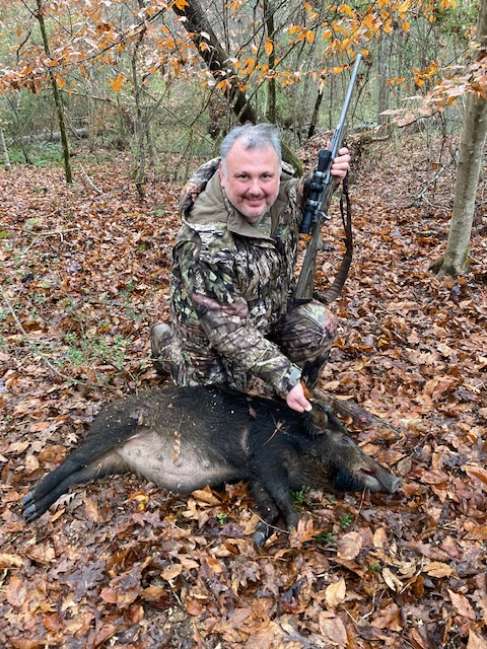 Please separate the fishing reports, putting the guides' reports under another title. Most of us can't fish everyday and we enjoy seeing the reports of the individual sport fishermen rather than that of the guides. Nothing wrong with reading the guides' reports and viewing the many pictures, but it would be nice to have them separate from the non-guided reports. Thank you! 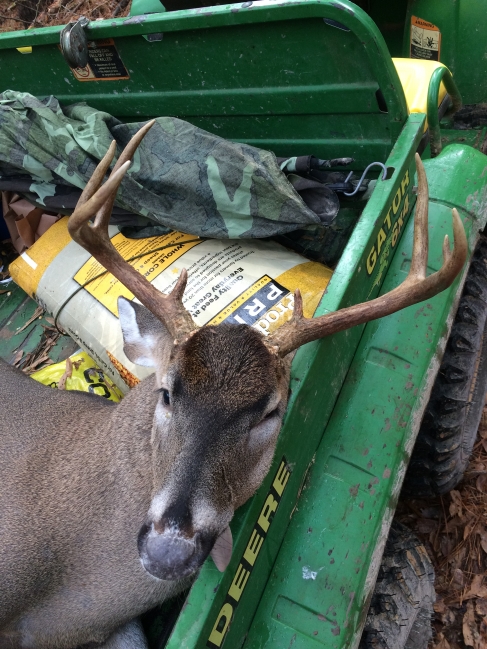 Thursday morning this buck showed up right out of the fog. Unreal experience when all you can see is 80 yards and a big deer appears out of thick fog. The old 280AI was accurate and the 202 pounder is being turned into sausage! Another great hunt at Liberty Trace Ranch in Amite Co, MS! 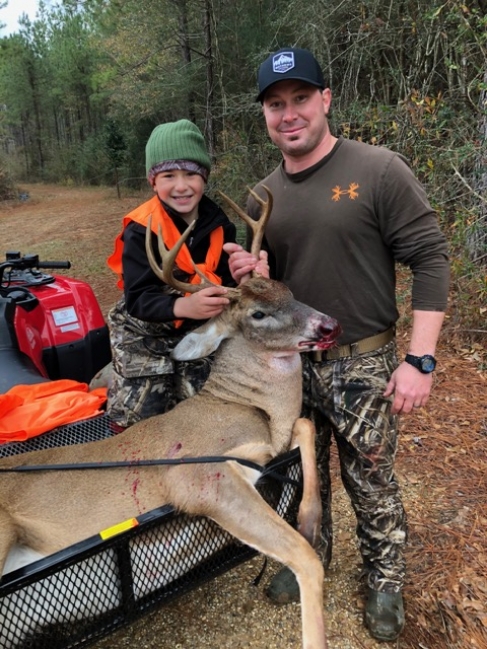 7 year old Parker Olivier got his first deer, a 200 lb buck on January 2, 2021 on the Jackson Hunting Club in Amite County, MS. What a great New Year for Parker and his dad, Brad!!!! 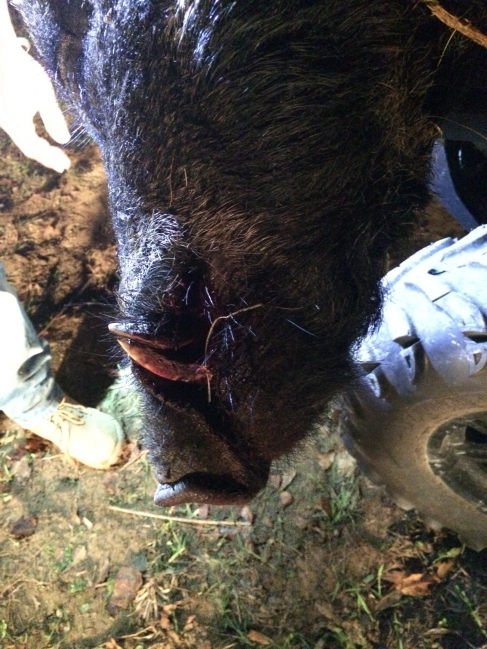 While hoping to take a nice fat doe with my 45-90 in Amite County, MS yesterday, I was fortunate to have a 70lb boar come out of the woods approximately 75 yards from my ladder stand. As I raised my Browning B-78, the boar turned away, heading downhill. The old Texas heart shot was in order and I sent the 405gr Remington jacketed soft point through his derriere and out his chest. He dropped like a sack of potatoes but it was only 4:27pm so I continued to hunt. Within about 20 min, a very large Russian boar came out, walking right past the dead, much-smaller hog.. The 400lb (according to the five men it took to lift him onto a four-wheeler) Russian boar took my second 405gr slug through the shoulders. It had four inch tusks! Fortunately, the big lifting help wanted both boars and no meat was wasted. What a great hunt!!! 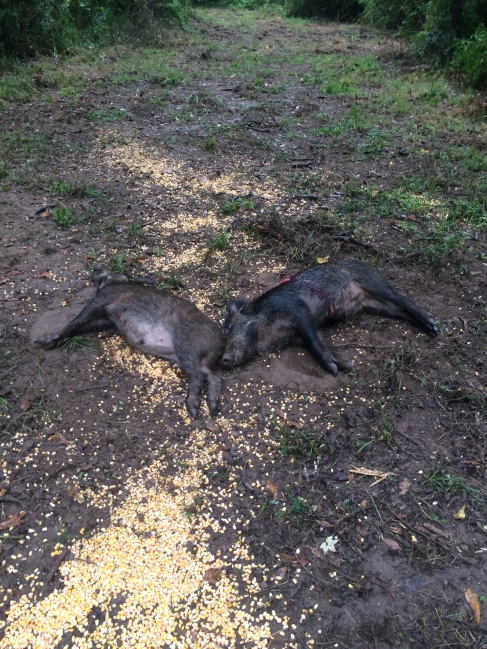 Tom Davis & grandson, Dason, came up from Ponchatoula to work on Jackson Hunting Club in Amite County, and we did a little prep work on Liberty Trace Ranch. While there we noticed quite some hog activity by one of the stands and put out some 'yellow call'. Dason sat for a few hours but nothing ventured out. Later, I went back to attempt to find a rifle sling Dason lost and was rewarded with a couple of nice (42 & 55 lb) sows. One shot from my Rem 7 .243 Winny with 100gr Partitions and both went down. Love it when the unexpected happens and you're prepared!!!! 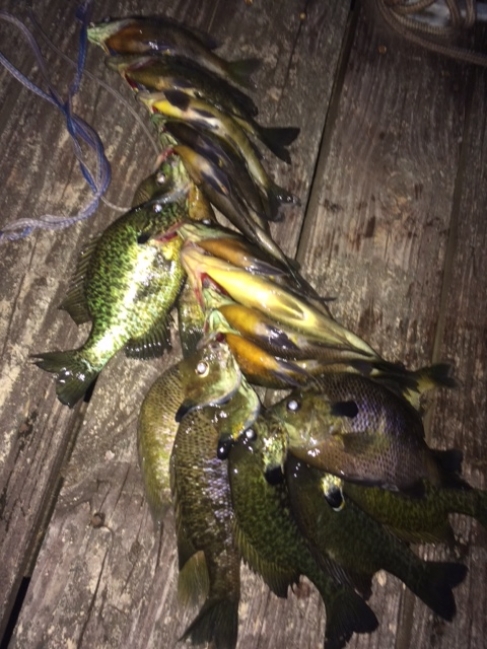 Had some free time from cutting hay and decided to pick up my old fly rod and work on the perch. In 1-1/2 hours, I landed 27 - chinquapin, blue gills and sun perch, and an assortment of small bass. Lost four white poppers in the process. This was back in late June and I was asked to post it anyway, but I hope to get back up soon! 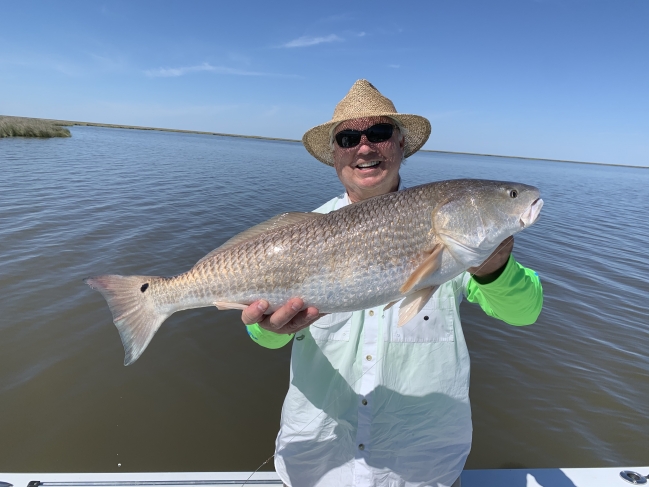 Got a late start but headed to Biloxi Marsh mid-morning yesterday. Saw plenty of boats running around, with most fisherman indicating clean water not to be found. Took a bayou further into the middle of the marsh and found some decent water in a 2.5 foot pond. Buddy caught a few small trout and all I got was a stingray, but the trout had us believing the water was sufficiently clean and saline. Fished a few other places with only gafftops to be caught over old Le Petit Island. Headed back to pond for evening bite as moon was rising. Caught a dozen or so specs (only 6 keepers), 4 sheepshead and a dozen or so reds, including a 31 inch bull that yours truly happened to hook. Kept 3 rat reds, 2 sheepshead and six trout for a few good suppers. On the way back to Rigolets Island, Lake Borgne was calm. 40 minutes from mouth of bayou to Rigolets Island! 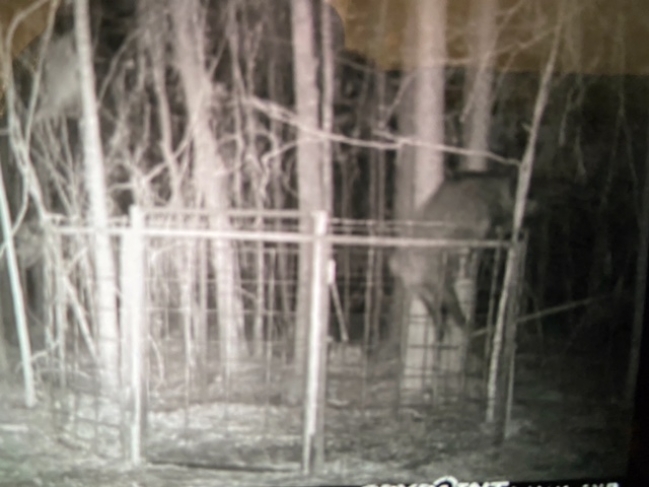 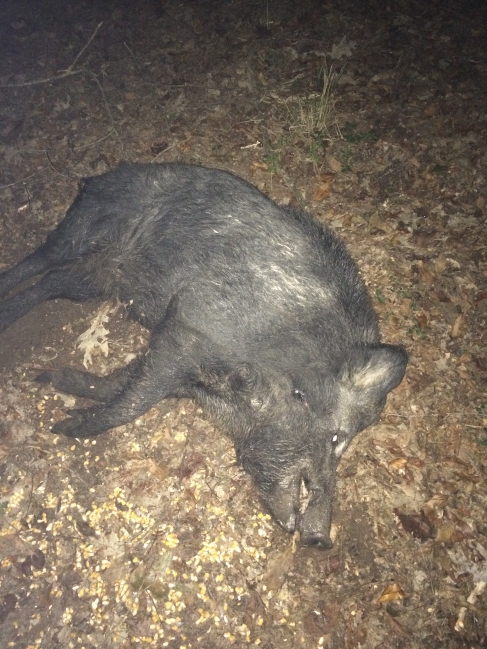 Another hog bites the dust! Saw several black hogs while bowhunting up in MS two weeks ago and went back last week with my 45-90. Right at sundown, this nice 150# boar showed up feeding away from me. Texas heart shot with Rem 405gr JSP travelled the length of him, coming out his cheek. Dropped like a sack of potatoes. Neighbor came to pick him up as he processes hogs whenever he gets a chance. Great chops!!! Trying to get back to fishing due to warm weather, as bowhunting has been interesting but not very productive. Seeing lots of does with fawns or yearlings, and a few young bucks. Should be a good year!!!!

Sure wish Tropical Storm Barry would suck all this fresh water out of here and send it to Mexico!!!!!!!

July 11, 2019 at 8:17pm
Best Place on Northshore for Depthfinder Installation

Say, where's the best place to have a depthfinder installed on my bow??? St. Tammany Marine did a great job installing my dash mounted Garmin, but they are no longer in business. I just want a simple depthfinder for the bow and any suggestions would be appreciated.

Please provide input or experience. Noticed an interesting phenomena last night. Fished my buddy's dock over in the Rigolets. He recently replaced all his dock lights with very bright LEDs. Caught a few fish, but noticed few strikes or surface action under our lights. Also, no bugs swarming around the big, bright LED lights. Across the canal, bugs were swarming his neighbors rather yellow lights. Also noticed more fish activity and the occasional strike of a game fish under the neighbors lights. Water depth in both places is quite similar, around 4' and deepening as you go out from the dock. Then it got really interesting! All night long the mullet were jumping everywhere, except under our big LED lights. They stayed out some 50 yards from our dock. When I turned the lights off, the mullet moved within 5 yards of the dock and were making a heck of a lot of racket RIGHT NEXT TO THE DOCK! Were the new, bright LEDs scaring away the fish??? Thanks for your input.

Anyone fishing the Rigolets or Lake Catherine? Made a few short trips over there in the last couple of weeks but saw no other boats. Water was very fresh to the taste and fish activity was rather minimal. Caught one nice 26' red on a rattle trap and several smaller reds. Managed one barely legal spec.

Had a fun but exhausting trip with my buddy, the Dentist, today. No tide and lots of wind from the East by 8am made fishing conditions tough today, but we caught PLENTY of fish. Unfortunately, only two made it in the ice chest, a 20' red and a nice flounder.

Caught the heck out of big GafTops on pearl minnow Gulp. Kept losing tails of the minnow to needlefish, though I managed to hook three. Also caught ladyfish, several limits of small reds (too small to keep), only a few 10' trout, croaker, pinfish and one 3 lb flounder. Interestingly, not a hard head cat was caught. Just fun fishing with a good friend - that's what it's all about!!!

Look forward to taking the Miss Kitti back out when conditions improve. 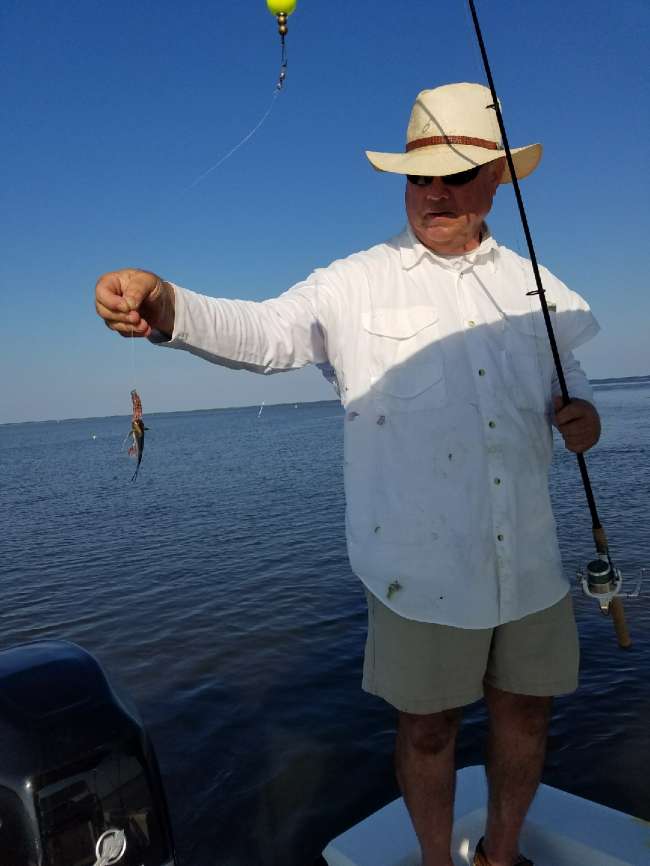 Tough day at Delacroix yesterday. Launched out of Sweetwater and headed toward Black Bay. High tide around noon, but water was still quite stained. Within an hour, water was moving out, full of moss and pretty dirty. Caught one bull red but couldn't keep the Gulp from the Gaftops. Water salinity tasted like 10 ppm, about like the potable water in Leeville. Only caught two trout which wouldn't reach 10 in. Caught a record Gaftop (smallest I've ever caught) on a 1/8 in jig & Matrix Shad (see pic). Bait was everywhere so I figured it was just a bad moon. That's why they call it fishing!!!

Anyone know where you can buy a GOOD catfish flipper. I used to have some that were galvanized with a rubber grip. All I can find are the cheap H&H aluminum ones. Hasn't someone made them out of stainless??? Thanks! 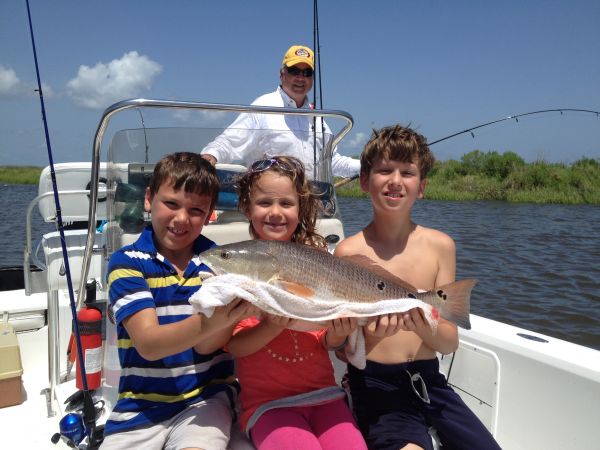 Gabriel, Michael & Hope Redmann from Destin, Florida, enjoyed a fantastic fishing trip out of Sweetwater Marina on June 16th & 17th, accompanied by their Dad, Major Kerry Redmann, III (USAF ret) and Grandpa Kerry Redmann, Jr. Uncle Kris Redmann guided them to small trout & drum Tuesday morning, with strong SE winds muddying the water requiring several relocations. The afternoon seemed more of the same, with the kids catching an interesting variety including croaker, stingray & a 4' garfish. However, Capt. Jack Payne III at Sweetwater Marina suggested a spot to take the children for fun with reds & drum Wednesday morning. This resulted in a large ice chest of reds & drum after two hours of constant action. Once the chest was filled, the children began catch & release during another hour of action. A great time was had by all!

Wanted to get some opinions on what folks think is the best light saltwater spinning reel - mainly for specs & reds. I know the Shimano Stradic is a fine reel, as I've fished with one for years. Kind of a flimsy drag, though-burned one up on the third bull red caught that day. Don't want to spend the bucks for a Stella-that price is ridiculous.

Have been pleased with the Fin-Nor megalite, but it's hard to get parts for them. Fin-Nor's Ahab 8 would be great, but I think it's too heavy. Haven't used a Van Staal. Daiwa's always made a great spinning reel, but I've lost track of the models. Would rather BUY AMERICAN! What do ya'll think???

Thanks, Wiz. My son chose to shoot the nice sow rather than the two boars running with her. It sure will be good eating! Besides, it's the sows that have as many as three litters a year. We can't keep up! Having trouble with this site myself! Had hoped to have gotten together to fish with you by now but Mande and I have both been busy. If we get another warm, sunny week, we'll have to take a shot at it! Stay safe!!!

GB3 is absolutely right. That spike needs to go as it is passing along its inferior genes. Unfortunately, many States' regs don't allow the taking of spikes until the spike's antler reaches a certain length. By then, much damage has been done. In my opinion, if a deer weighs 140 lbs or more and is still a spike, it should be shot.

I don't get to drink water that clear!!!!! Safe travels!

Send them to Him for a visit!

Wish my Paw Paw would have taken me fishing! Great report! Be safe and careful with Ida comin'!!!!

Tiger and I had great time with you and Jarrod! Bad time of year for fishing freshwater, though we did get cloud cover. Water just too hot in mid July. So excited to hear Jarrod won 2nd place with his bass. We'll take first next year!

Making me jealous, Wiz! Worked on Miss Kitti this morning. Mande and I plan to take her out Thursday and wet a line. Need to get down there and hook up with you sometime!

Pretty mount, Mande. Hope you beat your personal best when we bass fish in July!!!

Nice catch, Wiz! Mande, my son and I ventured back into Lake Borgne after first getting chased out by lightning storm this morning. Got into some small specs and croakers, but only kept two. Great day to be on the water! CCAguns

Not too shabby for short trip, Mande. Congrats,

Hopefully, Mande and I can get down there soon and hook up with you.

Good luck and Happy Anniversary to you guys, Mande!

Nice fish, Wiz! Had to be a blast on the wake bait!