Capt, I made a order for two of your programs. I got the confirmation. Is it being mailed to my house are do you still send an email with the downloads link?

Is your program still available? When I click on the link it defaults, saying not available?

VS
LOWRANCE
Any thoughts from the group?

Captain Paul, haven purchased one your downloads in a while. Which of these file can I load directly on my sd card?

WENT DOWN TO DELACROIX SATURDAY. HAD MY GRANDSON WITH ME. HAD TO WAIT OUT A THUNDERSTORM BUT DID GET DOWN TO SWEETWATER. AS ALWAYS, THE BUSY LANDING WAS BEING HANDING LIKE A AIRPORT. SINCE MY GRANDSON CAN'T DRIVE YET THEY PUT BOTH OF US IN THE BOAT AND SENT US ON OUR WAY WITH LIVE SHRIMP AND ICE. ALWAYS GREAT PEOPLE. WE WERE EVEN ABLE TO CATCH A FEW TROUT. MOST WERE CAUGHT IN FOUR HORSE LAKE ON LIVE SHRIMP. CAME BACK IN AND THE GENTLEMAN AT THE LAND HELPED ME GET PULLED OUT. GREAT FOLKS, THANKS SWEETWATER AND CAPT JACK.

Wanted to go to Hopedale and run the jetties. Once again Captain Paul helped me his program loaded onto my computer and on to my GPS unit. Was my first time there!! We followed his trail all the way out to the MRGO. Can I tell you it could have been more accurate? Every turn, every obstacle was marked perfect. His program made the trip enjoyable and safe. Cant wait to purchase some more of his map programs.

I have just had the pleasure of spending sometime on the phone with Capt Paul. I had ordered one of his GPS programs and was have some minor problems getting it downloaded on a SD card using the Lowrance GPS management tool. Capt Paul must have spent at least one hour of time working with me to get the problem I was having resolved. The biggest problem I had was my older Computer and Windows version. Once we got the SD card loaded and I got it placed into my GPS I couldn't believe the wealth of information I had just received. I can't wait to start exploring all the new areas that Capt Paul had opened up to me.

Capt Paul has a wonderful product that all Louisiana Coastal Fisherman must have. Even an experience angler could benefit from the wealth of information he provides.

Capt Paul, thanks for providing me and all the fisherman of Louisiana a wonderful product to make our time on the water more enjoyable and safer.

I will be adding more of your programs to my library.

Capt Paul, I know you have explained this before.
I have loaded the Lowrence Data manager on my home Pc. Now, when I purchase a Edge Map do you down load it to this file?

Went to Delacroix Saturday. Launched a Sweetwater marina. Once again, Capt Jack and his staff was very helpful. All my wife and I had to do was get in the boat. They put us in the water, got us some live shrimp and away we went. Capt Jack told us to go to 4 horse. Soon as we stopped the boat we started catching trout. This lasted for a short time and then they disappeared.
We than went after the redfish and had no problem catching a limit.

Once again, Thanks Sweetwater for the hospitality! 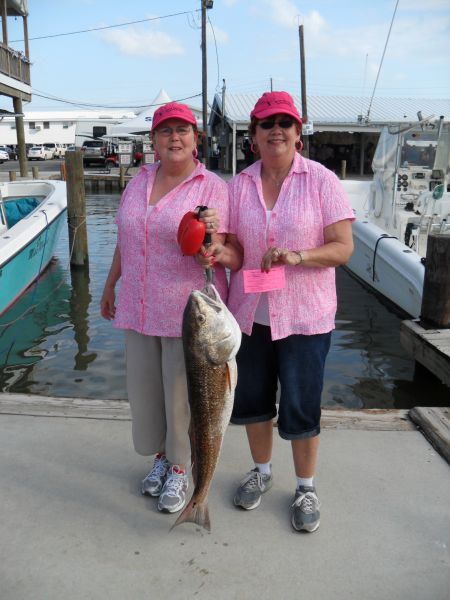 My wife and sister fished in the 2011 Gard Isle Ladies Rodeo. Wonderful event for a wonderful cause! Fishing was hard but the ladies were able to fish inside and bring some fish to the scales.

This is a nice red my wife caught. Wasn't big enough to make the top three but she had a good time pulling him in.

Paul, not sure what I did wrong. Sold my boat with a Lowrance HDS 5. I exported my Data to a SD card. Got my new Lowrance HDS 5. I can plug it into the unit. I can see my file name, but what I import the data I'm not getting anything/are don't see anything.

What did I do wrong?

Have sold my boat that had the Lowrance HDS 5 on it. I'm looking at a Key West that has a Garman 546s.

First question. Never had a Garman, how are the?
I see Garman doesn't take navoincs chips? Correct?
Before I sold my boat I copies all my data from my HDS 5 onto a SD card. Can the SD card be read by the Garman unit?

Captian Paul, how do the Navionics Maps work in areas like Delacroix and Venice? Would be using it in a HDS 5?

Went to Delacroix yesterday, Saturday. Fog was so bad driving thru New Orleans, had to look at the GPS to see if I was even in New Orleans. Got to Sweetwater landing and was met by their Great Crew who helped with the launching and all my other needs. Parked my truck, couldn't ask for more.

Now, we started off in 4horse, catching some small trout drifting and working the west shore near the pipe line. Moved from there over to the Pointe Finne area and found good water with some tide movement. Got all pumped up and my 175 Etech started having issues. Motor had been running great for almost 3 years. Brought it in for the 3 year tune up and bam. Was able to get back to the landing at about 3000rpm. Had brought a friend of mine whom never gets to go fishing and was trying to show him a good day. Oh well. Well bring the motor back to the dealer and see what is wrong.

Need a place for my wife and I that will alow us to bring our Gold Retriver? Because she is so old now we hate to leave her at the Vet?

This past weekend, was fishing in Venice. First day my GPS worked fine. However I did hit a underwater sandbar and destroyed the transducer.

The next day I noticed that the GPS would not pull in the entire map. Was like the map was blurred.

Would the two events be related.

I got this HDS about a year about on a warranty exchange from Lowrance. Been a good unit.

Ok, I changed the transducer and this solved the problem.

Capt Paul, I fish the Delacroix area and sometime out of Venice. I have a Lowrance HDS 5! Which would be the best Insight Map chip to purchase?

Had a great Redfishing trip to Venice with a Great Bunch of Guys. Caught all our redfish on spinner baits on the west side of the river.

Went to Vinice with a Great Bunch of Guys last week. Redfish were on, catching most everything on spinner baits. On Friday every boat limited out.

Just came back from a wonderful time at Griffin Fishing Charters. As always Raymond and Belinda greet you with open arms and a great hot supper. The rooms were clean and well maintained.

The next morning we were awaken to the smell of hot biscuits and eggs.

We were teamed up with one of Griffin's top guides Kris. Kris has a great 24 ft boat that offers everyone plenty of room to enjoy their morning of fishing. Kris always treats everyone with respect and tries his best to get everyone on the fish. He was fun to be with and did show this old man some good. He is young enough to be my son but he always teaches me something when I fish with him. His father should be proud of him!

I know these are tough times with the oil spill but Griffin Lodge is up and running. As for Kris to be your guide and I promise you a great time in Gods Woods and Waters.

FYI, Kaci no longer works there

I have emailed with my phone number. Did not see a number under contacts

Issues with this transaction?
You have 180 days from the date of the transaction to open a dispute in the Resolution Center.

Questions? Go to the Help Center at www.paypal.com/help.

Please do not reply to this email. This mailbox is not monitored and you will not receive a response. For assistance, log in to your PayPal account and click Help in the top right corner of any PayPal page.

You can receive plain text emails instead of HTML emails. To change your Notifications preferences, log in to your account, go to your Profile, and click My settings.

How long does it take to receive the email? Ordered about two days ago.

The only way it is going to be corrected is with legislation. Get in touch with your representatives. Join La Sportsman coalition on Facebook .

I would suspect that you are correct.

Thanks, do you use the side view features?

Thanks Capt for the report. I always like you reports and your review of different lures/baits. I have all used the Berkley product and have had great success.

With Red Snapper season open I'm sure they will be included.

My wife and sister fish it every year. Great fun. All inshore fish, lemon fish. Not sure about offshore fish.

Capt Jack and his family are great people and a class act. Where ever these negative comments are coming from they are unjustified.

August 09, 2013 at 3:31pm
A comment titled: Gulp on the bottom in response to a report titled: Bayou Bienvenue Help

What weight jighead were you using?

John, I just sent you a friend request on FB. My wife, grandson and dog where down there for the first time last Saturday. Looks like a great area. closer than going to Delacroix

I have met your Dad at the Landing. He is a young 70. Wonderful Man!

November 12, 2010 at 12:17pm
A comment titled: Sounds like fun in response to a report titled: louisianasportsman.com redfish tourney

I'll be there. Will be in the 19ft Progator. I guess I would be Team Baton Rouge Credit Union?

November 10, 2010 at 12:12pm
A comment titled: Weekend Fishing in response to a report titled: Fish are on in Delacroix!!

Cindy, I need your husband to tell me what we did wrong. Brought my sister and brother-in-law fishing Saturday. We went into 4 horse and worked the surrounding area. Used only artificials. Seemed like the North wind had moved some of the water out of where I have done good in the past.

Did not have a live bait are dead shrimp. Was that my problems are just don't know what I'm doing?

What time is the Fish Fry?

I HAVE A 13YR OLD GOLDEN AND KNOW HER TIME IS COMING TO AN END.

wildbill1974 has not filled this section yet.