User Name
poppincork
Member Since
January 12, 2006 at 6:39pm
Age
12
Location
prairieville, la.
Hunts For
Deer, turkey, and squirrels.
Fishes For
Specks and occassionally redfish. Bass in farm ponds in Ms. and bream with my wife and grandchildren in the Lake Verret area.
Organizations
None

FYI: For those of you that buy nonresident licenses in Mississippi, the MDWFP wants to raise the RESIDENT hunting license fee a few bucks. Many of the state legislators up there said that they would agree to it only if the non-resident fees were also increased. . That is what looks like is going to happen! It's Mississippi House Bill 1151 if you want to follow it . Good luck!

I came across an ad this morning for a free 2-year old yellow lab on Baton Rouge Craigslist. Thought some of you duck hunters may be interested. It has pics.

Just search 'Lab' and the ad will come up.

Amendment #8 on the ballot for the Nov. 4 is the Artificial Reef Development Fund. A 'yes' or 'for' vote will prevent the money being pulled out of the fund by the governor or legislature to be used elsewhere. If you remember, Jindal recently 'raided' this fund. Good luck!

I am going to buy my grandson a lifetime license. He is 8 years old. He was born in Ms. but has lived here, in La., since he was 2. I can go up to Quail Drive in BR to apply for it. But what I would like to know is what kind of documentation will I need to get it and how do they accept payment? I'd like to get it on the first trip! Thanks for any help. Tom

I have a couple of spinning reels that I use for trout that I am going to take the mono off and put braid on. I would like some opinions on what lb. to use , your suggestion of the brand, and do I need to do anything different when using it to fish a plastic under a cork. Thanks for any advice as I have only used it once on a baitcaster and was overwhelmed with backlashes! Good luck.

I am considering purchasing a Garmin 546s for my boat. I have a Garmin handheld that has worked great for me. Wanting some opinions of the 546s, good or bad! Thanks. Good luck!

I had heard that Ascension Parish had bought the boat landing that accesses the Maurepas swamp off of hwy. 22. It had a barroom next to it. Is it now public and open? It's a couple of miles east of the Airline. Thanks.

Hope they caught some fish on 'my dime'!!

Any of you 'boys' have a camp up in Claiborne county and had stuff stolen you may want to watch this news clip. This guy was caught with over $200K workth of 'toys'! Good luck.

http://www.wbrz.com/news/man-arrested-for-vehicle-burglaries-at-boat-launch/
I just passed this launch yesterday and noticed how it was on a very long straight stretch of highway with relatively low traffic volume.
Sheriff dept. did good catching him.

I'm looking for someone who makes custom tinted plexiglass boat windshields in the Baton Rouge or Gonzales area. I was told there was someone in Harvey who fabs. them. Hoping for someone closer. Thanks for any information.

Looking at a buying a new trolling motor. Looked at the Minn Kota Edge reviews at Bass Pro; not real good, 3/5.
Anyone own one of these and had problems? Thanks for any feedback.

I know there has been much discussion about motorguide and minn kota and which is the best. I am trying to make a decision between the MG tour and the MK maxxum. Both have a two year warranty and I would like to know what Warranty issues anyone has experienced (+ and -). Such as 'that's not covered', long waits for repair, repetitive parts failure, etc. with each brand. That may help me decide which to purchase. Thanks for any and all input. Good luck. Tom

Is there a public launch for the Cheramie area near Grassy lake on the east side near Labadieville? Looking for a shorter boat ride without going to Attakapas or to Doiron's on the west side. Thanks for any help. 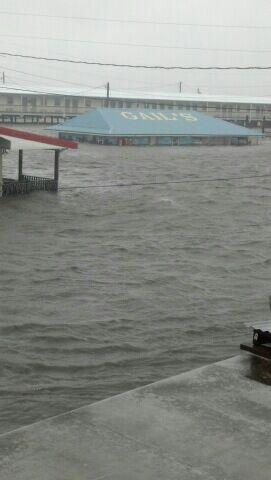 My son just sent me this. Hope Gail and others are safe.

I know plenty of you go up Hwy. 19 to Centreville and Woodville to your camp or lease, as I do. While I was up there the other day I visited with a friend who lives near Centreville. He told me that his daughter was recently traveling through Wilson to her job in Zachary when she was stopped and was given a speeding ticket. She was doing 46 in a 45. When she questioned the Wilson cop about it only being one mile over the limit, he replied 'he wants everybody to be $afe'. Good luck!

I saw there is a new service station on Hwy 3235 near Golden Meadow. Saw some boats filling up. Does anyone know if they sell non-ethanol gas?
Thanks for any information.

I saw where there is a gunshow in Natchez this coming weekend. I'll be at my place in Woodville, and may run up there to it. I was wondering if being a La. resident would prevent me from buying a firearm from a Ms dealer at the show? Thanks for any help. Good luck.

About 3 months ago I purchased the 2011 Bushnell Trophy Cam. It's taking good pictures and I have no problems with it. However, I am about to purchase another camera and I'm thinking about getting another of the Bushnell's. I'm curious if anyone has a 2011 BTC and has had problems with it? Thanks.

Do you think they're still biting right now? Would like to go down with some night crawlers. Thanks.

Thanks for sharing. Hope waterboy sees this!!

Check the fuse and the cable. My son has a MK charger. Banks in them fail. I have a Guest. If it isn't the fuse and it turns out to be the MK, replace with a Guest or Pro Sports. Let us know what you find!
Good Luck!

Thanks for the reply.. I'll give it a little time. Tom

JB, Think the catfish under a cork in the lake now would be good?

Thanks , rain kept me away.

Have they fixed this yet?

Thanks for the heads up. I fish there often. How far down toward Attakapas?
Isn't it a state hwy? File a claim with the state. I did that years ago regarding a stop sign and windshield damage. They paid. Let us know . Good luck. Tom

Thanks for the warning!!

Pretty rack! Wish it was freezing rain on the last weekend in Woodville. Roll Tide!

The coastal restoration projects are just about complete. The entire process is just a study by the 'good ole boys' ' consulting firms that will be completed when the money runs out!! Good luck!!

If you think the Bushnell's are bad then buy you some Moultries!! LOL> Good luck!! I h

I'm too old for change!!

May 26, 2016 at 7:21am
A comment titled: The latest. in response to a report titled: FYI: Mississippi hunting license increase for all!

The action was the result of the passage of House Bill 1151 during the 2016 legislative session. The bill, authored by House Wildlife, Fisheries, and Parks Committee chairman Scott Bounds, R-Philadelphia, calls for the first increase in resident hunting and fishing license fees in 23 years. It also stipulates the commission must first increase fees for nonresidents, but stops short of dictating which licenses or dollar amounts.

'We went up 27 percent on nonresidents, which is the same as resident,' commissioner Billy Deviney said. 'It was deliberate.'

No mention of the NR deer license fee. They may be waiting to spring that on you when deer season nears!
I hope Louisiana raises the NR saltwater license fee 27%.