I think I have a shooter coming to visit my Cuddy.

Reply to 270 WSM in response to a report titled:  I think I have a shooter coming to visit my Cuddy.

I think I have a shooter coming to visit my Cuddy. 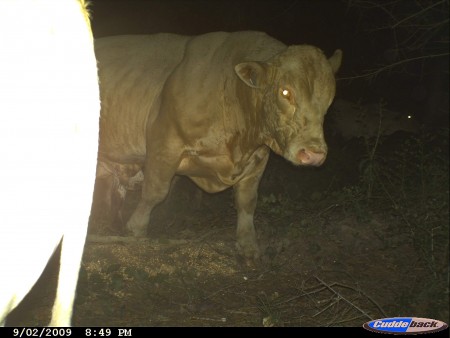 I finally got back to check my camera at my local lease and found a little bit of everything coming through. I may need a walk in cooler

I just upgraded from a 45 cal to a 50 TC Omega and curious to which bullets will group the best. I use to shoot powerbelt in my Knight 45. I signed in Omega this weekend with a box of Hornady SSR accu tip 250grain. They were OK but this good should group better than it did. Also how ofter do you swab between shots. I never went passed 4 shots before cleaning. The problem I have is after swabbing I would get stray bullets. Any feedback is appreciated.

Looking to purchase rice bran either in bulk or 50lb sack close to Baton Rouge. I can get it for 8.50 a sack now just looking for cheaper if its out there.

I am looking for a processor close to BR that can make summer sausage. I have used the guy in Gros Tate 2 years ago but forgot his contact info. Any feed back will help.

I was thinking about trying out a deer decoy to try and lure a few in closer while bow hunting. Has anyone had any luck with a decoy? Any tips?

I just bought an electric smoker so I can start smoking my own deer jerky. I read through the recipe book and they all require and long list of brines to creat so you can marinate the meat. If any of you guys or gals have an easy recipe for me to follow it would be greatly appreciated.
Thanks ahead for any feedback 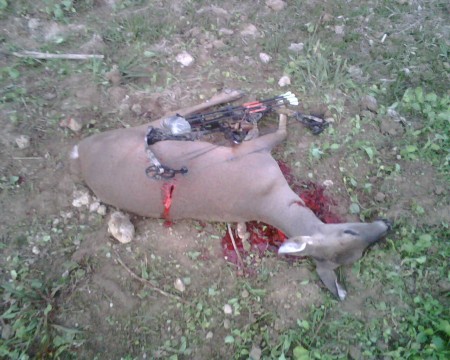 Just got back into bowhunting this year. Bought a new Mathews Drenline and topped it with a set of Rage broadheads. Yesterday was only the 2nd time on a stand with my bow. She wouldn't come any closer than 35yds so I let it fly. Not the best shot placment but she dropped in her tracks.

Need feed back
I purchase a set of Powerbelt 195 grain bullets and plan on shooting 100 grain of triple 7 powder. How high would you set your scope at 50 yards to be on at 100 and 150?

I am looking into purchasing my first muzzleloader this season and just wanted some feed back from the GURU's. I don't want to spend a bunch of money at first but want a set gun that is easy to learn and accurate. I have been looking at the CVA Optima pro. I also can't decide between the 45cal or 50 cal. Any feedback is helpful.

I just purchased a new 7mag and was looking for a great bullet to hunt LA and MS deer. The gun shop owner pushed me to purchase a Black Hills Gold 140 grain. He said this would do more damage than I need. Any other info?

I need feed back on my delima. I need a new scope for 2005 and can't decide between a nikon Monarche or a Burris Fulfield II. Can anyone give me some suggestions.
Thanks

I hear you Im sure they will give me hell but they were only on camera 2 days out of the 3 weeks my camera was out. This lease is just a place to take my son and stick a few hogs and possible a doe.

September 22, 2009 at 3:29pm
A comment titled: reply in response to a report titled: I think I have a shooter coming to visit my Cuddy.

I have a bucket in the tree dropping feed. Im sure it will flattened. He will make 1 hell of a head mount. Oh and the next pic has a close up of his Mountain Oysters. I figured the site was G rated so I didnt post.

September 22, 2009 at 1:05pm
A comment titled: reply in response to a report titled: Which muzzleloader bullets do you like?

That is the kind of info Im looking for. I really like the gun but another problem I have is the scope I put on it. Super slam Leupold. It has the different adjustments for pellets and bullet drop just confusing. I shoot 2 pellets.

September 21, 2009 at 11:36am
A comment titled: Thanks in response to a report titled: Which muzzleloader bullets do you like?

I hear ya on that but I bow hunt here in LA and IL. I got drawn for muzzleloader tags in IL. Main reason why I need to have my muzzleloader ready to roll.

September 21, 2009 at 11:32am
A comment titled: Rice Bran in response to a report titled: Looking for rice bran close to Baton Rouge

Where is this place located? Also does anyone know the place in Erwinville that sells bulk rice bran. Thanks

I was in Academy the other day and noticed a few doe decoys and was curious if they would lure anything in. Just looking for an edge.
Thanks for the reply Chada

November 20, 2007 at 4:12pm
A comment titled: Congrates in response to a report titled: Gabriels 1st Buck

That is one fine buck!

Well to tell you the truth I jumped from a tree and cut her neck with my Rambo knife but since I didn't have a lic. to carry that kind of knife I figured I better put an arrow in her.

The Rage tip did it's job no doubt. It cut her backstrap in half and clipped her spine.

Mtg man has not filled this section yet.