NSS in response to a report titled:  Best scope for the dollar? 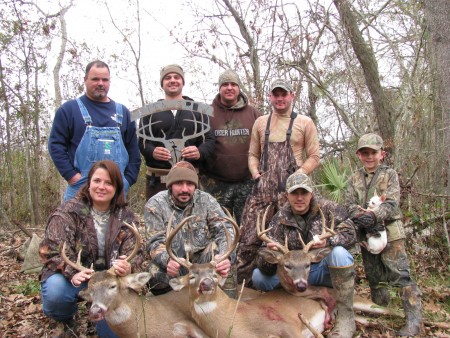 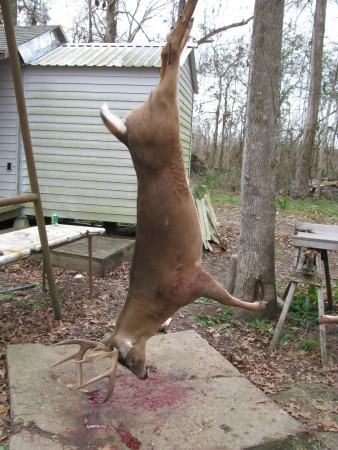 Got a good one this weekend!

I just bought a Yamaha Rhino side by side. I was looking at it the other day trying to figure out how I am going to load a deer in it by myself. If its a smaller deer (100-130lbs) I can pull it in the bed. But what will I do if it is a bigger deer? Any suggestions? 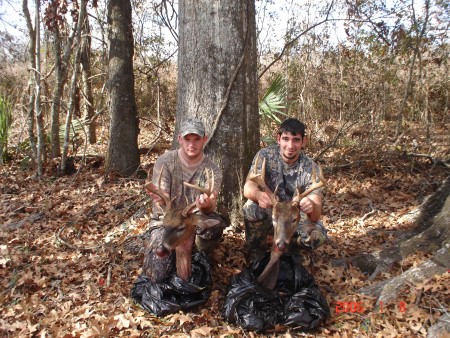 Me and my brother killed these two bucks Sunday morning at our lease. Its a great feeling to hunt your butt off and get this in return. And its even greater to share the experience with my brother. The rut is about to crank up in full force. We saw alot of smaller bucks chasing does. We let them all walk and got these two nice bucks. Management pays off!! LET EM GROW!!!!!!!!!! 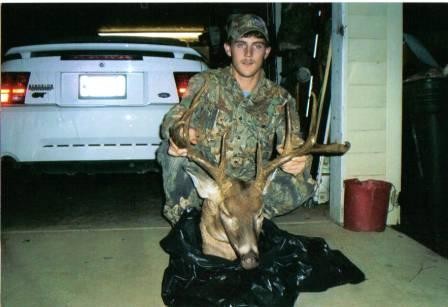 A friend of mine killed this deer around Thanksgiving in Mansfield, LA. It had a 19 1/2" inside spread and weighed 175 pounds.

Does anyone have any experience using a decoy in Louisiana? I know it is common in other states, but rarely used here. I would like to give it try this year. Maybe during the rut. Has anyone had any success using them? 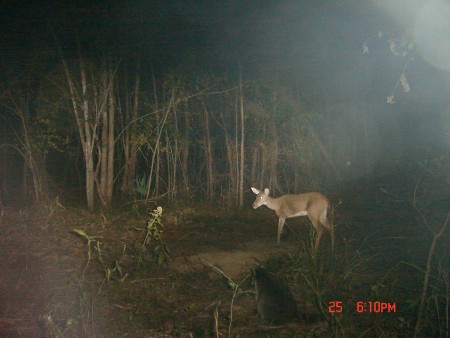 I got this picture on my camera last week. Looks like she's a leg short! 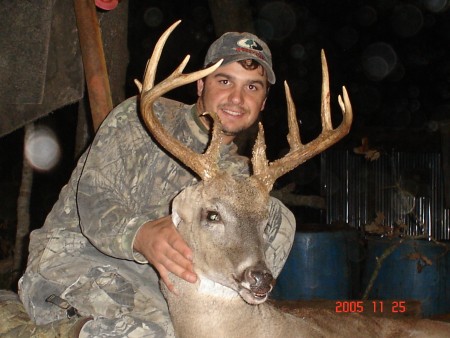 This nice 11 point was killed in Sherburne WMA Friday morning.

Barnes Spitfire VS T/C Shockwave 250 grain. I just bought a T/C Omega and I cant decide which ones to shoot. I have read a few testimonials on each. I want know if any one out there has tried both. I plan on shooting 100grains of pyrodex pellets.

I just purchased a T/C Omega Muzzleloader after I missed a big 8-point with my old Knight Saturday (@70 yards). I was wondering what kind of bullets and powder works best with these guns? What kind of grouping can I expect at 100 yards?
Thanks for any help! 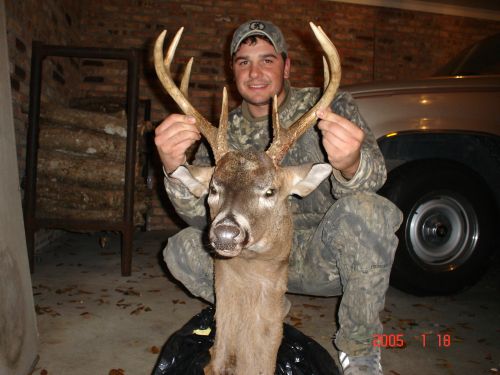 The rut is on!!! We have a lease near the Washington area. This buck was killed Monday afternoon chasing does and another 10 point and 6 point were killed this week. This buck weighed 195lbs with a 14 1/2' spread.

Check out Natchez Shooter Supply online. You can usually get a high end nikon for a great price. Some are refurbs some are brand new.

February 11, 2010 at 3:57pm
A comment titled: Swampghost in response to a report titled: Best Deer Camera

You can call me greedy because I have a job and pay for a deer lease. Thats fine with me, I couldn't care less. But if I catch you on my lease, my greedy *** will run you off. You must have voted for Obama with your liberal views!! And lets get this straight, all we wanted was the guys name to let him know he was on someone else's property. We dont want to fight with him or shoot at him or even press charges on him, just INFORM him. So if you dont like the post, keep your opinions to yourself. Or post you heart out, I dont care. Now I'm done wasting time talking to you. I do have a life you know. Have a nice day!

Ray/Possum, you want to talk about greed. How about the SOB's that stole cameras and stands off of this lease already. Thats greed buddy. How do I know its not this guy that stole them. I bet you my paycheck if he would have seen my camera, I would have never seen it again. He was NOT lost. He was about 3 miles into our lease and there is only one way in.

Well Possum, you can tell him and his dead dog Rusty's ghost that they are trespassing. We have had things stolen in the past and do not take kindly to trespassers. We also pay alot of money to hunt here and enjoy having the peace of mind that no one is there but us. I'm pretty sure you are just trying to be funny and piss people off. What ever floats your boat..

Did you kill any of those bucks in front of the dogs?

Check out Natchez Shooters Supply Online. They have some really good deals on ammo and other things. They have a monthly flyer with sales.

Nice deer man, especially for the marsh! Its hard to put the score of a deer on here and not have controversy. I posted an 8point I killed on here a few weeks ago and purposefully left out the score. Its seems something negative comes out of every post on here. Anyway, congratulations on a good deer! I think your score looks pretty dang close.

I would say mid to upper 120's, maybe more. Great deer! You can go online to the boone and crockett website to score it. It is very easy, you just put your measurements in and it calculates for you.

Thanks Fishbaja. Can you post the pictures or email them to me?

Thats awesome, I bet she was excited! I have a two year old daughter.

I think I'm going to let Janet Beard from Denham Springs do the mount. I saw some of her work and it is impressive. The backgrounds she does are very unique. I will post pics after its done.

I just killed one similar to that but more mass. It scored around 125. It is posted on here with the title St. Landry 8pt. Great deer! Congrats! If you search for the Boone and Crockett scoring system online, it walks you through. Pretty easy to do.

Weve been on the lease about 6 years.

January 21, 2009 at 7:59am
A comment titled: Taxidermist in response to a report titled: St. Landry Buck

I am looking for a good taxidermist. I have had many people tell me that Janet Beard in Denham Springs does great work. Has anyone on here seen her mounts? If so, can you post the pictures?

There are two "Let Em Grow"'s on this site. I hunt only in Louisiana and we are very proud of our deer.

St Landry Parish. Thanks for the insight Bangflop. There's always a critic.

January 20, 2009 at 10:17am
A comment titled: Bayou Bucks in response to a report titled: MUST SEE: LA's OWN hunting video! Bayou Bucks

I got an early copy of the dvd and watched it last night. It is very good! You guys need to get with Bayou Bucks and let them get some footage on your leases. It makes Louisiana hunting look great. Great job Jason! You got some awesome footage. I hope you come back film with us soon.

July 14, 2008 at 8:14am
A comment titled: Great guy in response to a report titled: Louisiana Deer Hunting

This guy came film one of the hunts on the dvd on our lease last year. He will have some great footage on there. We were so excited to be a part of somthing like this. All Louisiana hunts, No BS. This guy is really on to something! This dvd will not let you down. Money well spent!

let_em_grow has not filled this section yet.